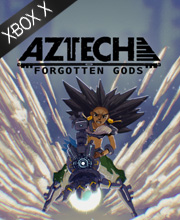 It's a digital key that allows you to download Aztech Forgotten Gods directly to Xbox Series X from Xbox Live.

How can I find the best prices for Aztech Forgotten Gods on Xbox Series X ?

Aztech Forgotten Gods is a really great time, even with its stumbles. It’s a beautiful world with a character you can see yourself in, especially if you’ve lost a loved one. Additionally, the design of the gods is a sight to behold. Truthfully, I can’t wait to see what other stories Lienzo tells next.