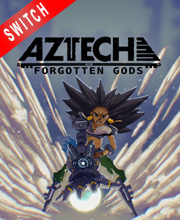 It's a digital key that allows you to download Aztech Forgotten Gods directly to Nintendo Switch directly from Nintendo eShop.

How can I find the best prices for Aztech Forgotten Gods on Nintendo Switch ?

Aztech Forgotten Gods stumbles its way into being something special. It certainly has faults both technical and simply in terms of design. At the same time it is also incredibly bold when it comes to its ambition. The unique elements of its design are executed very well, and it’s only in that final pass of polish that its limitations are truly evident. Even then, I struggled to put Aztech Forgotten Gods down once I started playing it. As I said at the outset, Aztech Forgotten Gods is perfect imperfection. While I can’t ignore its faults, I found myself significantly more enamored with its successes.

NINTENDO CODE : This is a digital code for Aztech Forgotten Gods Nintendo Switch. Use the download code on the Nintendo eShop of your Console. Once connected to the Nintendo eShop, you can enter and redeem the Download Code. Read carefully the store description about any language and region restrictions.
Standard Edition
Compare Choose & Buy Download (689)