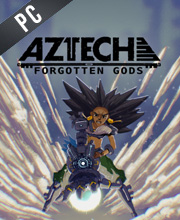 It's a digital key that allows you to download Aztech Forgotten Gods directly to PC from the official Platforms.

How can I find the best prices for Aztech Forgotten Gods CD keys?

Sometimes a game that just misses the mark on really coming together is still worth playing thanks to the parts of it that go above and beyond. Aztech Forgotten Gods is a game with a great central gimmick and a good core story, both of which are more than worth experiencing even if, as a whole, it just isn’t quite able to coalesce. It’s just a shame that the promise of its best facets isn’t deliver on when it falters on some of the more basic elements of its design.

EPIC GAMES KEY : Region Free / Worldwide. Requires Epic Games Launcher App in order to play the game. You need to create a free account here in order to download Aztech Forgotten Gods from Epic Plateform . Read the description on the store page about any language or country restrictions.
GOG.COM CD KEY : You need to register on Gog.com, then use the GOG Key to download and activate your game to play Aztech Forgotten Gods.
STEAM CD KEY : Use the Steam Key Code on Steam Platform to download and play Aztech Forgotten Gods. You must login to your Steam Account or create one for free. Download the (Steam Client HERE). Then once you login, click Add a Game (located in the bottom Left corner) -> Activate a Product on Steam. There type in your CD Key and the game will be activated and added to your Steam account game library.
Standard Edition
Compare Choose & Buy Download (689)