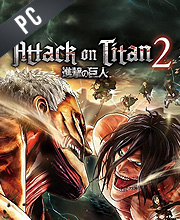 What is Attack On Titan 2 CD key?

It's a digital key that allows you to download Attack On Titan 2 directly to PC from the official Platforms.

How can I find the best prices for Attack On Titan 2 CD keys?

Allkeyshop.com compares the cheapest prices of Attack On Titan 2 on the digital downloads market to find the best sales and discount codes on trusted stores.

Attack On Titan 2 is an action video game that is developed and published by Koei Tecmo Games Co. Ltd.

Get to experience the Attack on Titan season 2 based on the anime story. Players will be able to enjoy the untold, original stories of the game. There are so many characters to choose from as well as buddies that will be able to help you in the field.

A more versatile omnidirectional attack is now available as well as many new moves that players will surely find helpful like sneak attacks, hook drives, and more. A detection gauge has also been added for you to know if you can still linger in the field. Get to use your restraining gun to capture those towering Titans.

With the game’s enhanced action also comes the chance to shed light unto the relationships of the characters. Fans of the anime will get to see a different side of their favorite character.

“Abandon All Fear” with this evolved Attack on Titan title. Enjoy more realistic Titans as well as the more developed action system of the game.

Zoom 1m 3m 1y All
Track product
EU STEAM CD KEY: Requires an EUROPEAN IP address or you must activate it with a VPN (Virtual Private Network) in order to play Attack On Titan 2. Might have languages restrictions or language packs. Read the description on the store game page to know if the EU IP is only needed for activation or for playing also (maybe on EU Servers). Most of the stores offer you their help, or show you how to do this with a tutorial to follow.
STEAM CD KEY : Use the Steam Key Code on Steam Platform to download and play Attack On Titan 2. You must login to your Steam Account or create one for free. Download the (Steam Client HERE). Then once you login, click Add a Game (located in the bottom Left corner) -> Activate a Product on Steam. There type in your CD Key and the game will be activated and added to your Steam account game library.
STEAM KEY ROW : It means for Rest Of the World countries which are not concerned by the region restrictions. This product can't be purchased and activated in Several countries. Please read the store description to know the full list of countries which are concerned. Use the key to Download and play Attack On Titan 2 on Steam.
Standard Edition
Compare Choose & Buy Download (772)