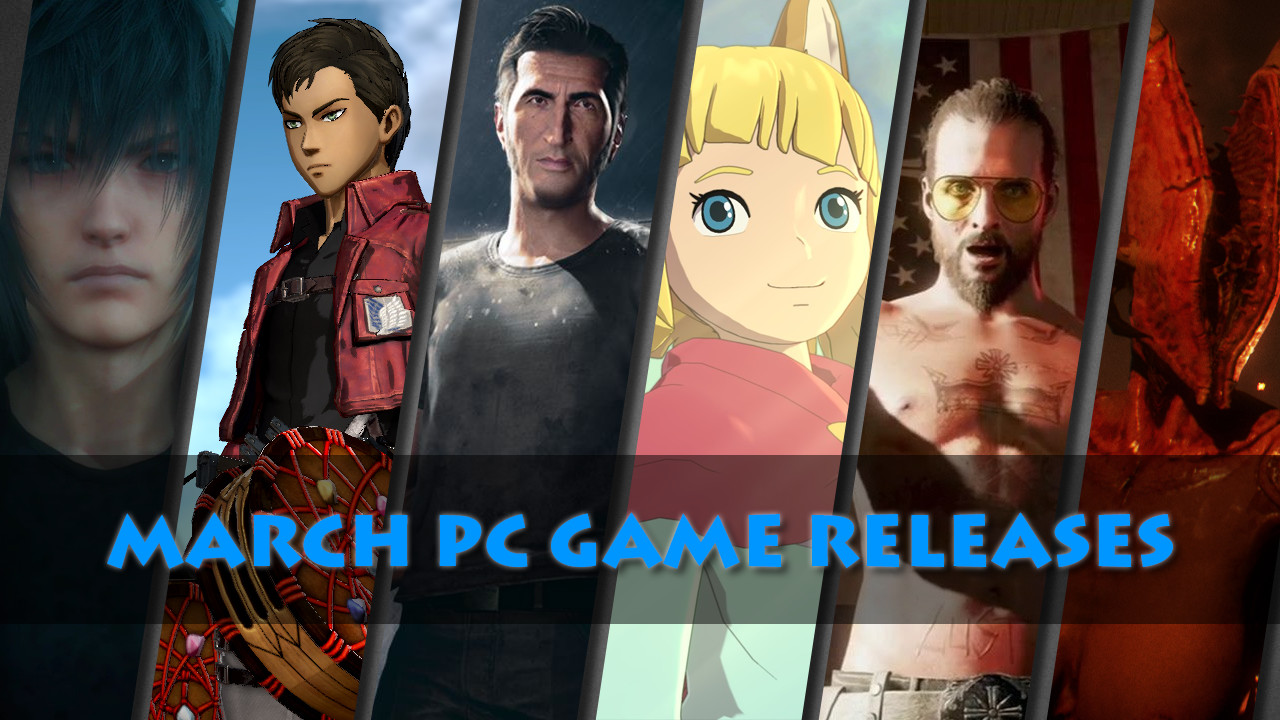 Still going strong with great new games, March continues 2018’s streak of great monthly releases. From the long time coming PC port of a hugely popular RPG, to the next installment of a much anticipated shooter, and even one of the most exciting multiplayer experiences coming out this year, you’ll definitely have your hands full this month. So, without further ado, here are the best March 2018 PC Game Releases for you:

It’s been a long time coming but the latest entry in Square Enix’s long running RPG series is finally coming to PC. Final Fantasy 15 Windows Edition will include all previously released Season Pass Content — Episode Gladiolus, Episode Prompto, Episode Ignis and the Multiplayer Expansion: Comrades — plus all new content that expands the already massive game world. You’ll also get to experience the world like never before with new graphical enhancements and support for HDR and up to 8K.

The next entry in the Fear Effect series will feature isometric stealth gameplay enhanced by the game’s Fear system. With the help of various weaponry and special abilities, you’ll need to explore different locations, both in our world and in the ethereal realms of Inuit mythology. This time around, you get to uncover more about the past of iconic Fear Effect characters as you take on a brand new mystery.

Attack on Titan returns for a second outing, featuring the story from Season 2 of the anime and a whole lot more Titan-slaying fun. Experience enhanced mobility with omni-directional movement, and even deeper combat with evolved Titan battles. You’ll also get to see a different side of your favorite characters as you develop your relationships with them while the story progresses.

If you’ve always dreamed of living the life of a pirate without the moral and legal implications, this might just be a game for you. Sea of Thieves is a multiplayer pirate sandbox that lets you roam the seas in your very own ship, either on your own or with friends. As you search for treasure, you’ll meet other players who could lend you a hand on your quest, or turn their cannons on you as soon as they see your sails.

ALSO ON: XBOX ONE

The next game from the makers of Brothers: A Tale of Two Sons is another coop adventure that puts you and a friend in the shoes of two convicts who must work together to escape prison and survive outside. Even when playing online, the game will always be presented in split-screen, as the game requires both players to be aware of each other’s situation at all times. Interestingly, you’ll only need one copy to play even when online.

As the boy king Evan, you’ll need to embark on an epic quest to build a new kingdom and unite the inhabitants of your world to battle the dark forces that threaten it. Level-5 has worked hard to craft interesting characters and a gorgeous world for the RPG, and it definitely shows. Built with western fans in mind, the gameplay is also more action-oriented than traditional JRPGs.

Experience the ins and outs of modern farming as you build your agricultural empire on a global scale. Featuring authentic farming vehicles from industry leaders, 4 different locales with dedicated machines and region-specific crops, and an all-in-one simulator for all aspects of modern farming, Pure Farming 2018 will provide hours upon hours of farming fun without becoming too hardcore.

Definitely one of the most anticipated releases of the year, Ubisoft’s open-world shooter comes home with it’s very first entry to be set in the US. Take on a militaristic doomsday cult that has taken over Hope County, Montana. You’ll have a reliable group of recruitable resistance members to back you up, and the game allows for a friend to help you out at any time with drop-in-drop-out coop.

You’re trapped in hell, tormented endlessly and without memories. Of course the only thing you can do is try like hell to get out. You’ll get to explore very hostile environments as you interact with other weary souls. You’ll soon learn that your only chance of escape involves a meeting with the mystical Red Goddess. Equipped with the power to control people and even posses simple-minded demons, you’ll need to use any means necessary to make that fated meeting happen.

ALSO ON: XBOX ONE

Following up a loaded opening for 2018, February features a variety of PC releases that are sure to keep gamers occupied even without a date on Valentine’s.

March it’s gonna be a great month for videogames. Excited to play Far Cry 5 and Ni no Kuni 2.