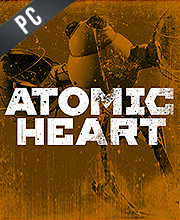 What is Atomic Heart CD key?

It's a digital key that allows you to download Atomic Heart directly to PC from the official Platforms.

How can I find the best prices for Atomic Heart CD keys?

Allkeyshop.com compares the cheapest prices of Atomic Heart on the digital downloads market to find the best sales and discount codes on trusted stores.

Atomic Heart is an action, adventure video game that is developed and published by Mundfish.

This first-person shooter is set in the events of an alternative universe during the midst of the Soviet Union. You will get to play as a Soviet KGB officer as he is sent on a mission to check out Facility 3826 as this specific facility became radio silent all of a sudden.

The world has several regions with different biomes as well as multilevel structures. You will get to explore both the surface as well as underground departments of the abandoned Facility.

Most of the enemies that you will encounter are a variety of combat vehicles and robots that had been produced by the Factory. The robots were originally made in order to serve the Soviet Industry or the Soviet citizens in their daily routines. However, they were also programmed to have a combat option just in case a war breaks out.

Your team is waiting for your report, you must return to them alive.

STEAM CD KEY : Use the Steam Key Code on Steam Platform to download and play Atomic Heart. You must login to your Steam Account or create one for free. Download the (Steam Client HERE). Then once you login, click Add a Game (located in the bottom Left corner) -> Activate a Product on Steam. There type in your CD Key and the game will be activated and added to your Steam account game library.
Standard Edition

If Atomic Heart is as good as the official trailer, i’m definitely gonna check it out. Looking forward to see here the deals for this game

The released screenshots and trailer of the game shows a promising game, it may look like a S.t.a.l.k.e.r game with better graphics but I think there is more to it, many good deals.