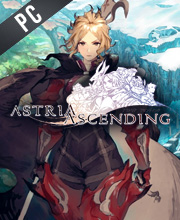 What is Astria Ascending CD key?

It's a digital key that allows you to download Astria Ascending directly to PC from the official Platforms.

How can I find the best prices for Astria Ascending CD keys?

Allkeyshop.com compares the cheapest prices of Astria Ascending on the digital downloads market to find the best sales and discount codes on trusted stores.

Astria Ascending is a turn-based JRPG developed by Artisan Studios, inspired by the trappings and style of old-school JRPGs like the final fantasy series. Immerse yourself in the world of Orcanon a world on the brink of chaos destruction, play as soldiers from the 333rd company of demigods trying to stop it from happening. While the setup might sound like JRPG cliché, Astria Ascending promises a mature and emotional narrative rife with betrayal and sacrifice.

If you are a turn-based RPG fan looking for a new experience that brings fresh twists on classic elements of the genre, I cannot recommend Astria Ascending enough, just so long as you don’t need an overly engaging plot to pull you along.

Astria Ascending is an excellent example of what a modern JRPG should look like, from the amazing artwork to the in-depth mechanics. Even though all eight characters are playable from the start, the customization options and progression give the player so many opportunities to change things up and make their experience unique from anyone else’s.

A set of cosmetic items exclusive to this pack containing a total of 8 weapons, equipment pieces, headpieces.

A downloadable pack containing a digital map featuring all of the major cities in the game and a 70 – page art book containing 2D models, promotional art, and concept art.

EPIC GAMES KEY : Region Free / Worldwide. Requires Epic Games Launcher App in order to play the game. You need to create a free account here in order to download Astria Ascending from Epic Plateform . Read the description on the store page about any language or country restrictions.
GOG.COM CD KEY : You need to register on Gog.com, then use the GOG Key to download and activate your game to play Astria Ascending.
EU STEAM CD KEY: Requires an EUROPEAN IP address or you must activate it with a VPN (Virtual Private Network) in order to play Astria Ascending. Might have languages restrictions or language packs. Read the description on the store game page to know if the EU IP is only needed for activation or for playing also (maybe on EU Servers). Most of the stores offer you their help, or show you how to do this with a tutorial to follow.
EUROPEAN STEAM GIFT : It’s a steam gift for Europe which requires an European IP address to activate and to play Astria Ascending on Steam. Read carefully the store description about region and language restrictions.
STEAM GIFT : A Steam gift is a one-time transfer you receive. You activate and install Astria Ascending to play on Steam, it is a non-refundable game that stays in your Steam games collection. Please read the store description about any language or region restrictions.
STEAM CD KEY : Use the Steam Key Code on Steam Platform to download and play Astria Ascending. You must login to your Steam Account or create one for free. Download the (Steam Client HERE). Then once you login, click Add a Game (located in the bottom Left corner) -> Activate a Product on Steam. There type in your CD Key and the game will be activated and added to your Steam account game library.
PC Win 10 / Xbox Key. Digital code which allows you to play on both Xbox and Windows 10 PC. See below for more informations.
Collector Edition
Standard Edition
Compare Choose & Buy Download (743)