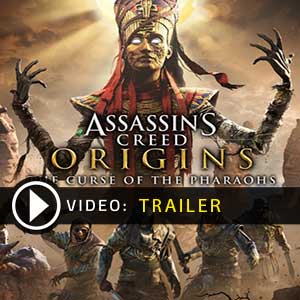 What is Assassin's Creed Origins The Curse Of The Pharaohs CD key?

It's a digital key that allows you to download Assassin's Creed Origins The Curse Of The Pharaohs directly to PC from the official Platforms.

How can I find the best prices for Assassin's Creed Origins The Curse Of The Pharaohs CD keys?

Allkeyshop.com compares the cheapest prices of Assassin's Creed Origins The Curse Of The Pharaohs on the digital downloads market to find the best sales and discount codes on trusted stores.

This is the second expansion to come out of the Assassin’s Creed Origins. It will come with new characters, enemies, and missions that are all based on Egyptian Mythology. Bayek would be going through a whole different region and would be fighting with Anubis warriors, giant scorpions, and many of Egypt’s mightiest beasts.

In the Curse of the Pharaohs, Bayek will be investigating some mysterious events in the city of Thebes. He finds out that a curse has been placed in the region making it a nightmare to be living in. Bayek must lift the curse and to do so he must investigate how it came about while fighting off the beasts that came with the curse.

With this additional content, Bayek’s level cap will be increased and he will also have new abilities. The new regions available to be explored are The Valley of the Kings, City of Thebes, Aswan, and Oasis. There will also be new legendary weapons that come with unique attributes.