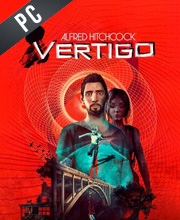 It's a digital key that allows you to download Alfred Hitchcock Vertigo directly to PC from the official Platforms.

How can I find the best prices for Alfred Hitchcock Vertigo CD keys?

Allkeyshop.com compares the cheapest prices of Alfred Hitchcock Vertigo on the digital downloads market to find the best sales and discount codes on trusted stores.

Alfred Hitchcock Vertigo is a psychological thriller adventure game developed by Pendulo Studios, step into the shoes of Ed Miller, a writer who has recently mysteriously developed severe Vertigo after coming out unscathed from a terrible car crash down in Brody Canyon, California. He claims that he was traveling with his wife and daughter during the accident but at the scene, he was found alone with no indication anyone else was with him. With his shaky memory and trauma caused by the event, he starts therapy to uncover what really happened on that faithful day.

Vertigo offers a thrilling and captivating playable story that touches on some very serious themes. Not for the feint hearted or weak in temperament.

Alfred Hitchcock – Vertigo is an interesting narrative-driven adventure game, or more like an interactive story, which incorporates several themes from Hitchcock’s work. While not linked to the film of the same name, Vertigo is similar in many ways and – like Vertigo – features a compelling and well-told story with (mostly) interesting and well-developed characters.

There is definitely  an interesting game here, and a fair bit of fun to be had from unravelling its bonkers storyline.

Zoom 1m 3m 1y All
Track product
GOG.COM CD KEY : You need to register on Gog.com, then use the GOG Key to download and activate your game to play Alfred Hitchcock Vertigo.
EU STEAM CD KEY: Requires an EUROPEAN IP address or you must activate it with a VPN (Virtual Private Network) in order to play Alfred Hitchcock Vertigo. Might have languages restrictions or language packs. Read the description on the store game page to know if the EU IP is only needed for activation or for playing also (maybe on EU Servers). Most of the stores offer you their help, or show you how to do this with a tutorial to follow.
STEAM CD KEY : Use the Steam Key Code on Steam Platform to download and play Alfred Hitchcock Vertigo. You must login to your Steam Account or create one for free. Download the (Steam Client HERE). Then once you login, click Add a Game (located in the bottom Left corner) -> Activate a Product on Steam. There type in your CD Key and the game will be activated and added to your Steam account game library.
Deluxe Edition
Standard Edition
Compare Choose & Buy Download (759)