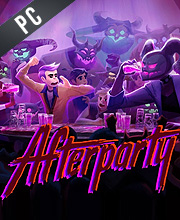 What is Afterparty CD key?

It's a digital key that allows you to download Afterparty directly to PC from the official Platforms.

How can I find the best prices for Afterparty CD keys?

Allkeyshop.com compares the cheapest prices of Afterparty on the digital downloads market to find the best sales and discount codes on trusted stores.

Afterparty is an adventure video game that is developed and published by Night School Studio.

Play as Milo and Lola, they are best friends who have just recently died and found themselves facing eternity in Hell. There is however a chance for re-entry to earth and that is to outdrink the devil, Satan himself.

Milo and Lola are currently in the underworld, specifically in Nowhere which is the outermost island of Hell. They are dead as well as thirsty, so there could be a chance that they might beat Satan in a drinking contest.

First, you must condition yourself and know your surroundings, get to know why you have been damned into eternal suffering in hell.

Offering an intelligent conversation system that is able to change the story as well as your relationship depending on your choices. Get to know the personalities of each character as well as remember any blurry memories during the events of the night.

Before challenging Satan, there are a lot of pubs in hell with a lot of different things to do like beer pong, drinking competitions, and dance-offs.

Will you see Milo and Lola get back to Earth? Play Afterparty and find out.

EPIC GAMES KEY : Region Free / Worldwide. Requires Epic Games Launcher App in order to play the game. You need to create a free account here in order to download Afterparty from Epic Plateform . Read the description on the store page about any language or country restrictions.
GOG.COM CD KEY : You need to register on Gog.com, then use the GOG Key to download and activate your game to play Afterparty.
EU STEAM CD KEY: Requires an EUROPEAN IP address or you must activate it with a VPN (Virtual Private Network) in order to play Afterparty. Might have languages restrictions or language packs. Read the description on the store game page to know if the EU IP is only needed for activation or for playing also (maybe on EU Servers). Most of the stores offer you their help, or show you how to do this with a tutorial to follow.
EUROPEAN STEAM GIFT : It’s a steam gift for Europe which requires an European IP address to activate and to play Afterparty on Steam. Read carefully the store description about region and language restrictions.
STEAM GIFT : A Steam gift is a one-time transfer you receive. You activate and install Afterparty to play on Steam, it is a non-refundable game that stays in your Steam games collection. Please read the store description about any language or region restrictions.
STEAM CD KEY : Use the Steam Key Code on Steam Platform to download and play Afterparty. You must login to your Steam Account or create one for free. Download the (Steam Client HERE). Then once you login, click Add a Game (located in the bottom Left corner) -> Activate a Product on Steam. There type in your CD Key and the game will be activated and added to your Steam account game library.
Standard Edition