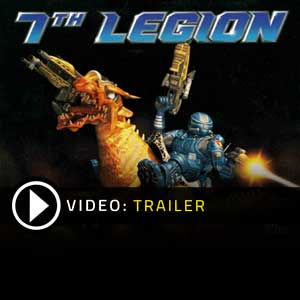 Find all Game Code stores and prices to download and play 7th Legion at the best price. Save time and money: Compare CD Key Stores. Activate 7th Legion CD Key on your Steam client to download the game and play in multiplayer.

You can participate to these tests by adding comments about your digital download purchase in the store review page. Enjoy the best deals for 7th Legion CD Key with Allkeyshop.com!

7th Legion is a real-time strategy computer videogame, developed by Vision and Epic MegaGames and published by MicroProse, and later re-released by Tommo Inc.

The conflict in 7th Legion takes place in the future. Rampant overpopulation and overuse of Earth’s natural resources have regressed the planet’s ecosystem to a critical point. The game is styled as a standard RTS game. Players assume the role of a commander of either the Chosen or those that were left behind, with the overall objective which is to annihilate the other faction.

To do so, the player has to amass funds to construct various buildings and war-machines, while recruiting foot soldiers to combat the enemy. Each player can collect special power-ups that would be found in boxes distributed across the map. These would provide bonuses to the force who collected the box. These bonuses include making the player’s forces invisible to the enemy or increasing overall unit strength.

Players could also take advantage of special “power cards.” These cards have certain effects on events in-game; for example, some cards damage enemy troops, while others cause mechanical troops to malfunction.

STEAM CD KEY : Use the Steam Key Code on Steam Platform to download and play 7th Legion. You must login to your Steam Account or create one for free. Download the (Steam Client HERE). Then once you login, click Add a Game (located in the bottom Left corner) -> Activate a Product on Steam. There type in your CD Key and the game will be activated and added to your Steam account game library.
GOG.COM CD KEY : You need to register on Gog.com, then use the GOG Key to download and activate your game to play 7th Legion.
PUBLISHER WEBSITE CD KEY: Use the CD Key Code to download directly on the Official Website or from the store to play 7th Legion. Follow the instructions given by the store. Verify languages available and possible region restrictions before buying.
STEAM GIFT : A Steam gift is a one-time transfer you receive. You activate and install 7th Legion to play on Steam, it is a non-refundable game that stays in your Steam games collection. Please read the store description about any language or region restrictions.
Standard Edition. Read the store description to know the content.

Be the first one to write a review about 7th Legion !