15 of the Best Racing Games to Jump Into Right Now 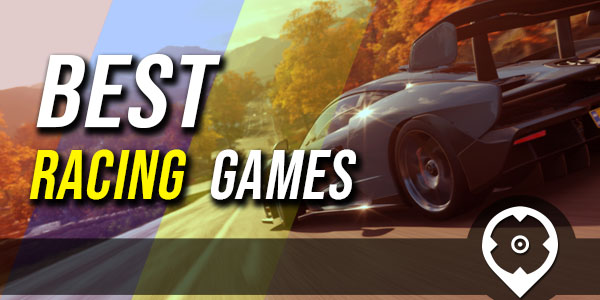 What are the best 15 Racing Games?

Enter the arena in rocket-powered cars in fast-paced soccer and vehicular mayhem in the game that challenges your team to hit a ball larger than yourselves into the opposition’s goal.

Rocket League boasts more than 57 million players, more than 500 trillion customization combinations for your car and cross-platform play. It was has been nominated for more than 150 Game of the Year awards and continues to be updated with free and paid updates. Play for fun in Casual mode or hit the ranks and work your way up the leagues. The game features 1v1, 2v2 and 3v3 and 4v4 game modes as well as a range of extra modes such as basketball and hockey-inspired modes.

Dirt Rally 2.0 will challenge you on a host of iconic rally locations from across the world, including Spain, New Zealand and Australia. It will test your instincts and your ability to handle the most powerful-off road vehicles ever made. The game is the 13th in the Colin McRae Rally series and features eight official circuits from the FIA World Rallycross Championship. You will develop your team, cars and race strategies in events and championships in both offline and online game modes. Tune your car’s set-up, upgrade your parts and get competitive in daily, weekly and monthly challenges in the most authentic off-road experience ever, either in normal or VR mode.

Assetto Corsa in the next generation in racing games, with circuits that have been laser scanned to ensure accuracy and exclusive cars that are official licensed, and enough mods and customization to satisfy every racer, from hobbyists to the pros. The game features more than 50 cars, from classic to supercar, more than 21 tracks, 5 showrooms, 10 game modes and 16 apps for when in the car and racing. Whether it’s to experience a legendary track with the game’s unique options that allow you to race in the same conditions the real track is currently under, or to race competitively against season pros, Assetto Corsa is the most authentic and rewarding racing game available.

Dominate the land, air and sea across the entirety of the USA in a wide range of cars, bikes, boats and planes to rise as a multi-skilled motorsports champion. Hit the streets of New York, cruise through L.A, fly through fog above the Rocky Mountains and cut through the Mississippi River with the ability to switch between vehicles with a press of a button. Join a connected open-world and challenge others to rise to your records, and capture and save your best moments in an instant by pressing a button.

Live the stories of a young street hustler, a retired bank robber and a terrifying psychopath, each with their own special abilities. in the award-winning world of Los Santos and Blaine County. Play in third or first-person, navigate by foot or vehicle as take part in endless activities, such as scuba diving, BASE jumping, playing golf, hunting, playing darts or tennis and visiting the cinema. The possibilities are endless in one of the biggest and most ambitious games ever created and you can explore all that it has alone or with friends in both co-op and competitive modes available.

Internet racing has never been so easy or competitive than with iRacing, offering racers of all kinds a way to race the way they want in an inexpensive way. Join real races against real people with open practice, qualifying, testing, ghost racing and time trials. Share spotting, pit crew duties and driving with teammates in events that are up to 24 hours long. Enjoy officially licensed cars, real-world physics, private sessions and more than 800 existing leagues in a thriving online community with more than 90,000 fellow racing enthusiasts.

Slip your leathers on, hit the road and lead your biker gang in an epic ride across the country in a driving combat road rage adventure that is the spiritual successor to the Road Rash franchise. Chase down an assassin with the reward of $15 million dollars on the line. Wield tons of brutal weapons, explore a massive and expandable skill tree and kick, grab, counter and critical strike your way through the opposition bikers to claim the reward. Collect your loot, upgrade your character, bike and weapons in a massive campaign or enjoy up to 4-player split-screen or online PvP action in a bid to claim the roads as your own.

Drive hard and die last in this full-contact racing experience with no rules. From the developers of FlatOut 1 and 2, Bugbear, expect epic crashes, neck-to-neck fights to the finish line and once-in-a-lifetime moments. Survive the unique racing experience with true-to-life physics, unique banged-up cars and a soft-body damage model. Upgrade your car’s body armor, reinforce with heavy iron and balance the weight in a bid to match performance with damage with meaningful customization. Play the campaign, survive challenges or wreck your friends in demolition dominance. Wreckfest is the ultimate driving playground.

Slip on the gloves of a professional race car driver in the premier free-to-play racing simulation on the PC. Race in single-player and online multiplayer with a selection of free-to-play cars and modes or stand against the giants as RaceRoom is the home of the WTCC, DTM and ADAC GT Masters – getting you closer to professional racing and drivers. Hit the road in true realism, feeling and seeing what a professional race car driver does, capture the glory in sponsored competitions and race your level with Novice, Amateur and Get Real game modes available.

Jump into the seat of more than 180 elite brand race and road cars in the world’s most beautiful, authentic and technically-advanced racing game. The game is tested and tuned by pro drivers and games to deliver true-to-life handling, features real-world career progression, dynamic surface and weather physics and a full 24-hour cycle with real-time atmospheric conditions. You can have a true experience of a professional race driver more than ever as the game offers full 12K and virtual reality support, giving you the ultimate racing journey.

F1 2019 is the official videogame of F1 and features all the teams, drivers and circuits and now includes the F2 series. The game sees a greater emphasis on graphics fidelity, environment enhancements, an overhaul of night races with improved levels of realism and an upgrade to the F1 broadcast sound and visuals. Rise against your rivals in the official Formula One World Championship or establish your reputation in the new F2 career before moving up into F1. Then head online and test yourself against the best in the dedicated F1 Esports area.

Experience a truly realistic, immersive driving game that offers near-limitless possibilities in an open-world setting. Vehicles and environments are hand-crafted and the soft-body physics engine simulates every component of the vehicle in real time, resulting in realistic and dynamic behaviour. The game features campaigns, scenarios, time trials, bus routes and a track builder, giving casual and hardcore gamers alike something special.

Jump behind the wheel of the official game of the FIA World Rallycross Championship and experience the thrills and exhilaration of off-road racing. Dirt 4 features more than 50 of the most breath-taking off-road cars ever built, 5 incredible rally locations with millions of routes, as well as dirt racing in Pro Buggies, Pro-2 Trucks, Pro-4 Trucks and Crosskart vehicles. Tune, tweak and survive the wear and tear of improved and realistic damage modelling in Career Mode or in a number of challenges with live ladder, leagues and tournaments as well as daily, weekly and monthly challenges available in online competition.

Return to the whacky, crazy and fast-paced take on the racing car genre with TrackMania 2 Stadium. Join millions of racers in a game that easy to pick up and learn, but hard to master. Enjoy over 65 unique tracks in the massive single-player campaign where you will gather medals and compare times with players from all over the world. Create your own tracks, car skins, game modes or videos and share with the community in a thrilling racing experience that will take all of your skills if you want to reach the top.

What Is a Racing Game?

A racing video game is played in either third or first-person perspective and puts the player in a race situation where they control any land, water, air or space vehicle. Racing games are a chance for a player to experience real-world world class circuits, such as the Monaco Grand Prix in F1 2019, or fantastical fictionalized worlds like those found in the Wipeout series of games. A racing game will challenge the players in many ways, challenging players in game modes such as Time Trial, Ghost Mode and Career, and will more often than not give players the chance to test their skills in online multiplayer races. Virtual Reality has changed the racing video game genre for the better, often giving players the chance to fully immerse themselves into the cockpit of real-world cars to take part in real-world races against real players. Playing in VR is the closest a player can get to being a professional racing driver in an elite competition, as they fight the turns, feel the speed and live the race.

Why Are We Doing a Best 15 Racing Games List

In the world of Strategy Games, fantastic games can be found at incredible prices but you can also be at a greater risk of being left disappointed.