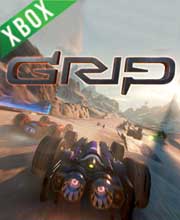 It's a digital key that allows you to download GRIP Combat Racing directly to Xbox One from Xbox Live.

How can I find the best prices for GRIP Combat Racing on Xbox one?

Allkeyshop.com compares the cheapest prices of GRIP Combat Racing on the digital downloads market to find the best sales and discount codes on trusted stores.

GRIP is a combat racing game developed by Caged Element Inc. and published by Wired Productions.

Inspired by the Rollcage games released at the end of the 90’s, GRIP Combat Racing features gravity-defying races between cars equipped with heavy weapons. Hit speeds of 767mph in one of 15 armoured cars as you race through 22 tracks across 4 exotic planets, picking up 9 different power-ups and weapons along the way. Compete against the AI or challenge a friend in local splitscreen multiplayer, or maybe even challenge people from around the world in online multiplayer.