These Battlefield 1 Weapons Will Take You Back to WWI 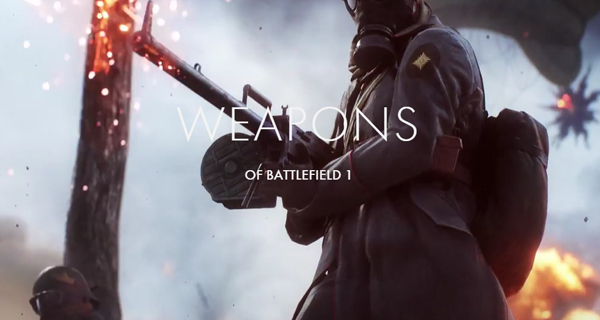 A couple of posts in the Battlefield website revealed details about Battlefield 1 weapons. We all know that the game is set in World War I, so we’re pretty excited to see which of the era’s weapons are included.

Battlefield 1 will have six weapon categories, and each category has tons of different weapons you can choose from. Customization options are also available (though limited) through the use of pre-set Loadouts. The developers have made it this way so “you’re still able to customize your weapons to make sure they work with your playstyle, but in a more focused way.”

And as far as melee combat is concerned, melee weapons are actually a big thing during World War I. The multiple types of  melee weapons available each have their own attack speed and damage output. These weapons can also be used as tools for cutting barbed wires, destroying barricades, or even for damaging light vehicles. Bayonets will also be available, allowing you to attack enemies head on.

Grenades will also play a huge role in the game. There are several grenade types you can use, and if you use it at the right time, you’ll get to kill more enemies effectively. Grenades range from the traditional frag grenades, to gas grenades and incendiary grenades among others.

DICE has also added a “huge amount of real-world audio” recording of these weapons, so you’ll only get the best and realistic sound effects there is.

These are just some of the best things Battlefield 1 has to offer. Which World War I weapon are you most excited about? Tell us in the comments below!