15 of the Best Mature Games and Compare Prices

“You want to play a Mature Games, but don’t know which one to choose?

Luckily Allkeyshop is here to help you with this top 15 of the best Mature Games!”

Be the life of the party and make decisions that matter in this open-ended social simulator mixed with point-and-click adventure. It features more than a dozen characters, thousands of dialogue lines, and more than 50 items.

Experience the story of six catgirls who are tasked with serving and pleasing their master’s desires. The game has plenty of jokes, bath scene nudity, and the option to toggle breast jiggling.

Explore the award-winning world of Los Santos and Blaine County in Rockstar North’s masterpiece, Grand Theft Auto V. Play the epic story of three unique characters and join them as they rob, borrow, and murder across one of the largest and most detailed maps in gaming history. Jump into Grand Theft Auto Online’s various modes, with support for 30 players and two spectators.

Go back to where it all began with Yakuza 0, the prequel to the original, and experience 1980s Japan, now with 4K resolutions and uncapped frame rates. Battle your enemies on the streets, alleys, or wherever suits you as you freely walk around Kamurocho and Sotenbori. Cause trouble with everyone you interact with and do anything you can to become a legend.

Punch, kick, throw, and combo your way to glorious victory in the goriest Mortal Kombat ever. Refine your skills in offline and online modes such as Story Mode, Towers of Time, Klassic Towers, and Krypt. Play with all 37 characters, including The Joker and The Terminator, and humiliate your opponent with more than 100 finishing moves as each character has two Fatalities and a Brutality.

The ultimate fast-paced 3D fighting series from Koei Tecmo Games returns with Dead or Alive 6. The story continues from Dead or Alive 5, with the main focus being on the battle between Ninja and DOATEC and M.I.S.T., with new side stories available. New to the series with this latest game, the Special Move Gauge, the Break Gauge, adds a new dynamic to fights and can be activated with a button press.

Bayonetta’s unique, fast-paced, over-the-top style comes to PC with 60fps and unlocked HD resolutions. Play as the last survivor of an ancient clan and uncover the truth of your past. Defeat giant enemies and creatures, and fight for your future.

9. South Park: The Fractured But Whole

Enter the crazy world of South Park with the award-winning sequel to 2014’s South Park: The Stick of Truth. The Fractured But Whole is a turn-based 2.5D RPG with all your favorite characters from the show, including Stan, Kyle, Cartman, and Butters. Players take on the New Kid’s role, choosing any of the three starting classes available at the beginning of the game. In all players will unlock ten classes, including Plantmancer, Cyborg, Psychic, and Gadgeteer.

A new cast of 16 classmates enters the dangerous world of Danganronpa. Imprisoned in school, they must kill each other if they are to survive the nightmare. Investigate the murders of your classmates, uncover motives, and use your skills in all-new minigames that put you in a deadly trial for survival. The only way to survive in the latest Danganronpa is to outwit, out-think, and lie to those you thought were friends.

Catherine is a story of love, betrayal and commitment from the makers of the Persona series, ATLUS. The game is an action puzzler and for the first time features a Japanese voice over for Western audiences in 4K resolution and unlocked framerates. There are 3 game modes, Golden Playhouse, Babel, and Colosseum.

Rescue the girls in your life from the demons that possess them by shooting them with your Pheromone Shot weapon to give them an exorcism. Be a knight in shining armor and satisfy the girls in quests to unlock new missions and scenes. Equip demon-vanquishing weapons and jump into the game’s all-angles action.

Travel between two worlds on an adventure that has cults, lust, and shameless ecstasy. Use portals to move between realities, search for hidden items to unlock backstory, and escape the creatures that follow you.


Take control of Hardee, a half-human, half-robot trying to escape her way out of a complex full of traps. Complete more than 100 rooms with no checkpoints, and continue your path without the aid of medkits or health regeneration. Explore fully as all items are hidden and learn to fail to succeed.

Leisure Suit Larry returns more obscene and hilarious than ever with another adventure full of questionable morals. Help Larry through puzzles and quests to reunite him with his true love, Faith. Explore more than 50 locations, meet dozens of new and old friends, and refine your chat up lines, all in the name of love.

What is a Mature Game?

A Mature Game is intended for older audiences, typically ages 17+, and can contain sexual content and violence with blood and gore. 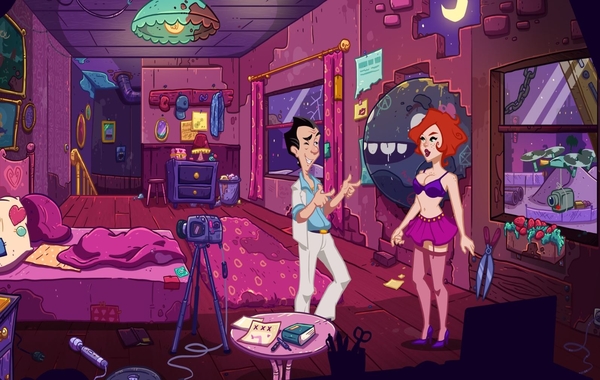 They can also feature themes not expressed in other genres, such as sexual orientation, identity, and same-sex relationships.

Mature games often present violence in a more graphic detail than mainstream games, with over-the-top or realistic depictions of killing, dismemberment, and executions, and use extravagant amounts of blood.

Why Are We Doing a Top 15 Mature Games List?

Mature Games are available at incredible prices, but with so many to choose from, we want to help you pick the game that’s right for you.