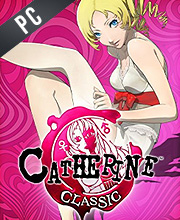 What is Catherine Classic CD key?

It's a digital key that allows you to download Catherine Classic directly to PC from the official Platforms.

How can I find the best prices for Catherine Classic CD keys?

Allkeyshop.com compares the cheapest prices of Catherine Classic on the digital downloads market to find the best sales and discount codes on trusted stores.

Catherine Classic is a story-driven puzzle game developed by Atlus and Published by Sega. This is a PC port of the cult-hit classic that released for the Xbox 360 and Playstation 3 back in 2011.

Follow the misadverntures of a man named Vincent who finds himself having weird nightmares after meeting a girl named Catherine. The fateful meeting pulls him into a bizarre love triangle between his girlfriend Katherine and his new seductive lover.

Gameplay is divided into two segments. The story plays out like a third-person point and click adventure game that’s heavy on cutscenes and decision-making. Once Vincet falls asleep, he is thrusted into the dream world where he must climb a tower that’s constantly while moving blocks to escape from the monsters chasing him.

Be the first one to write a review about Catherine Classic !

This is a good game brought back from the PS3 era, time to go back into Vincent Brooks’s nightmares and solve those puzzles, too bad the real remaster of this game Catherine Full body will be released exclusively on PS4.