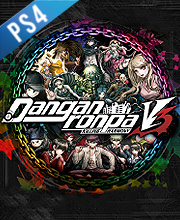 It's a digital key that allows you to download Danganronpa V3 Killing Harmony directly to Playstation 4 from PSN (Playstation network).

Allkeyshop.com compares the cheapest prices of Danganronpa V3 Killing Harmony on the digital downloads market to find the best sales and discount codes on trusted stores.

Danganronpa V3: Killing Harmony is an adventure visual novel developed by Spike Chunsoft and published by NIS America Inc. This is the third main title to come out of the Danganronpa series and is the first ever to come out on a console.

High school student’s Kaede Akamatsu, Suichi Saihara, and 14 others were kidnapped. They then find themselves in the Ultimate Academy for Gifted Juveniles. These students are being held there by robot bears called Monokuma Kubs. The students are informed that in order to escape they must kill another student and successfully get away with it in the Class Trail.

As with the previous Danganronpa series, there will be a School Life as well as a Class Trial segment in the game. The School Life allows players to interact with other players in order to investigate what happened in the murder. The Class Trial segment are nonstop debates where Truth Bullets are required in order to determine who is telling the truth and who is lying.

New gameplay elements have also been added like the Mass Panic Debates that will have multiple characters talking over each other to confuse players. Debate Scrums are groups of characters that debate against each other where players would have to use one statement against the other. New mini games are also added in the game.

Will you escape the evil bears? Play Danganronpa V3: Killing Harmony and find out?