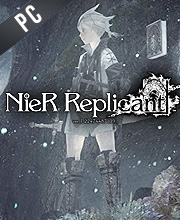 It's a digital key that allows you to download NieR Replicant ver.1.22474487139 directly to PC from the official Platforms.

Allkeyshop.com compares the cheapest prices of NieR Replicant ver.1.22474487139 on the digital downloads market to find the best sales and discount codes on trusted stores.

Enjoy an updated version of NieR Replicant with its modern upgrades, updated visuals, and so much more. Play as a young man who is set to save his sister from the illness brought about by the Black Scrawl. Accompanied by the Grimoire Weiss, a talking tome, you will search for the “Sealed verses”.

NieR Replicant ver.1.22474487139… is one of the most carefully constructed re-releases in recent memory. I was delighted to see just how much of the original experience remained intact, with the bulk of alterations focused on its visuals and combat.

Nier Replicant is a fabulous remaster of a lauded but messy cult classic, improving it without giving up on its essential strangeness.

Zoom 1m 3m 1y All
Track product
EU STEAM CD KEY: Requires an EUROPEAN IP address or you must activate it with a VPN (Virtual Private Network) in order to play NieR Replicant ver.1.22474487139. Might have languages restrictions or language packs. Read the description on the store game page to know if the EU IP is only needed for activation or for playing also (maybe on EU Servers). Most of the stores offer you their help, or show you how to do this with a tutorial to follow.
EUROPEAN STEAM GIFT : It’s a steam gift for Europe which requires an European IP address to activate and to play NieR Replicant ver.1.22474487139 on Steam. Read carefully the store description about region and language restrictions.
STEAM GIFT : A Steam gift is a one-time transfer you receive. You activate and install NieR Replicant ver.1.22474487139 to play on Steam, it is a non-refundable game that stays in your Steam games collection. Please read the store description about any language or region restrictions.
STEAM GIFT ROW : This a steam gift for ROW regions. It means for Rest Of the World. This product can't be purchased and activated in Several countries. Please read the store description to know the full list of countries which are concerned.
STEAM CD KEY : Use the Steam Key Code on Steam Platform to download and play NieR Replicant ver.1.22474487139. You must login to your Steam Account or create one for free. Download the (Steam Client HERE). Then once you login, click Add a Game (located in the bottom Left corner) -> Activate a Product on Steam. There type in your CD Key and the game will be activated and added to your Steam account game library.
Standard Edition
Compare Choose & Buy Download (772)

I never got to place this game but I have watched it being played alot and I would say its worth the money! Great Website to!

NieR:Automata was an awesome experience and I have heard that NieR Replicant ver.1.22474487139… is an absolute masterpiece. I would wish to play it some day to share my experiences.