The guys over at Rebellion has released the Sniper Elite 4 101 Gameplay Trailer which highlights the game’s key features and new content. The video is just a little over six minutes long, but is packed with everything you’ll need to know about the game.

The video specifically talked about five main elements in the game: campaign, combat, enemies, weapons, and multiplayer. Let’s take a quick look at each of them.

Sniper Elite 4 features an “expansive campaign” which is created for 1-2 players. The game boasts of having the “largest, most diverse environments ever created in a World War II game.” From fishing villages, mountainous valleys, ancient forests, and more, you’ll never run out of places to explore and call your own sniping nest.

The campaign mode also includes optional side missions you can complete in whichever order you choose. And if you’re up for some exploration, you’ll also get to discover hidden regions and collectibles hidden all over the map.

Silence is your friend in Sniper Elite 4. You must adapt to your surroundings in order to take down enemies stealthily. As a talented marksman, your athletic skills are put to use, especially when scaling vertically to climb walls, or even to silently take down enemies.

You can also opt to choose a sniping nest and assassinate your enemies even from the most extreme distances. If you need to come up close, you can also go ahead and create distractions, setup traps, or surprise attacks.

Of course, you’ll have to face enemies in the game. They will range from elite enemy units, tanks, and more. You should choose to be careful when dealing with certain types of enemies, such as radio operators. These guys can call reinforcements when alerted.

Assassinating some enemies will also be of advantage to you, like in the case of an officer. If you assassinate one, you’ll get to search his body for a logbook which reveals the whereabouts of his troops.

As an elite sniper, you are equipped with only the best weapons of the era. You can choose from iconic World War II rifles, sub-machine guns, shotguns, explosives, and heavy weapons. You will also be able to upgrade your weapons’ core attributes (recoil, stability, scope, etc.).

And to bring your Sniper Elite experience to the next level, you can also take on the game’s co-op and competitive multiplayer modes. Up to four players can play in these game modes, and you can choose from the six custom-designed maps.

You’ll get to know more of these awesome features in the Sniper Elite 4 101 Gameplay Trailer below:

Sniper Elite 4 comes out on 14 February on PC, Playstation 4, and Xbox One. 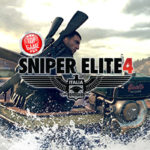 Rebellion Development has recently revealed the Sniper Elite 4 trophy list which consists of a whopping 51 trophies in total! Check out the full list here!