September 2016 Game Releases: 14 New Games to Spice Up Your Month 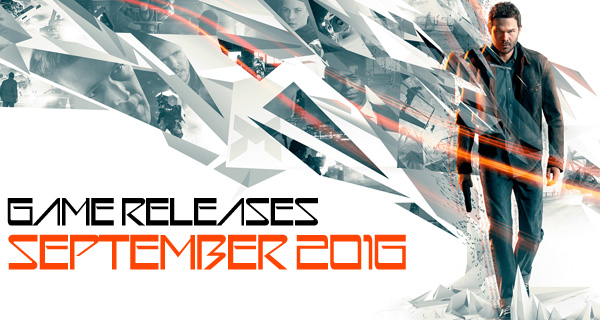 Spice up your games library with these upcoming September 2016 game releases! It’s going to be another great month in video games. This month we’ll be expecting the release of popular sports titles such as FIFA 17, PES 2015, Forza Horizon 3, and NBA 2K17. The Xbox exclusive Quantum Break will also be making its way on Steam. Bioshock The Collection will also be bringing us a remastered version of the Bioshock games. We’ve got other titles that you could get excited about, so check out our entire list below!

If you’re a fan of the One Piece anime, then you’ll surely love One Piece Burning Blood! This new fighting game features Monkey D. Luffy, also known as the World’s Most  Famous Pirate. The game features a fast-paced 3 vs. 3 rumble, more than 40 playable characters, and Devil Fruits and “Haki” abilities. You can also relive the Marineford War through its stunning cutscenes!

This game’s got violence written all over it. Mother Russia Bleeds is a co-op beat-’em-up game that is set in an alternate USSR. You will play as a street fighter punching, clawing, and stabbing your way into ghettos, violent prisons, laboratories, and night clubs. Up to four players can battle it out in its local co-op mode. It also features a Story Mode and a Survival Mode.

This real-time strategy game puts you in the shoes of Harvey Croft. As Croft, you will take on the vacant position of Police Chief. Put a stop to crimes by coordinating with your police force. Train and deploy special units, crime scene investigators, detectives, and police officers. Collect and examine evidence. All these and more exciting police action are waiting for you!

Build and manage your own skyscraper in Project Highrise! You will have several roles in the game. As the architect, you’ll have to build a world-class skyscraper and coordinate each and every aspect of construction. As the owner of the building, you must make sure your tenants are happy and are paying rent on time. And as a developer, you have to invest and ensure your future.

PES 2017 banks on interactive reality this year. New features let you experience a game as close to reality as it can be. Real Touch lets players control the ball according to how you control them. Its new Adaptive AI will learn how you play and adapt according to your play style. New animations make player movement become more natural than ever. Goalkeepers have also been updated with new animations and motions. And lastly, the new myClub Scout/Auction feature lets you buy the players you want.

This new IP introduces you to Joule Adams, one of the last humans remaining on earth. You will get to meet and eventually forge friendships with loyal robot companions. These robots each have their own powers and abilities which will help you in your battle to save mankind. Featuring a dynamic world and over 12 hours of gameplay, enjoy an adventure like never before in ReCore!

Play Bioshock, Bioshock 2, and Bioshock Infinite in all its remastered glory! Bioshock The Collection not only gives you improved visuals, but also access to previously released DLCs such as Burial at Sea and Minerva’s Den.

Time is in your hands in Quantum Break! You will play as Jack Joyce who has the power to manipulate time. Use this power to your advantage during battles, when locating objects, enemies, or allies, or even when you want to get more information about past events. Previously released exclusively for Xbox and Windows 10, Quantum Break will now be available for Steam this month.

Release Date: 20 September 2016 2K Games promises that NBA 2K17 will bring the most authentic and real experience in basketball simulation.

Cossacks 3 is the modern remake of the 2001 strategy game. It features all the elements that the original game has been known for comined with 3D graphics. The game includes 12 nations you can choose from, 70 different units, 100 research opportunities, and more than 140 buildings. Also enjoy grandiose battles with up to 10,000 soldiers in the battlefield, whether in land or in sea!

The earth is now inhabited by robots. In The Ucertain, you will take on the role of a root named RT-217NP. Curious about the human race, you will explore the world and find out what secrets are being kept from you. Solve puzzles along the way, test your skills, and unlock the mystery the human race was.

For the first time ever in a FIFA game, FIFA 17 adds a single-player story mode called The Journey. In this game mode, you will follow the story of Alex Hunter as he makes his way to the Premier League.

Explore Australia in Forza Horizon 3! Enjoy the open world Down Under, customize everything, hire and fire your friends, and enjoy up to 350 cars!

Defeat the evil Lord Monotone and save the galaxy from his annoying tune! Shoot and dodge your way through randomly generated levels as one of the Laser Disco Defenders.You’ll also get to groove to 70’s disco-style music and customize your character with colorful 70’s-inspired fashion! All these are coming to you on Steam this month!

So which of these games are you looking forward to? Let us know in the comments!

Thanks for the news…..

That was so helpfull…..

all of these game look amazing to me i hope i can buy as many as i can but cant buy them all …..