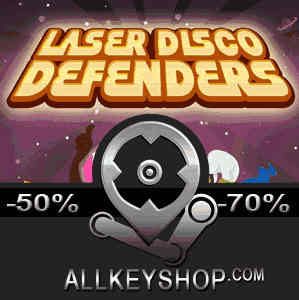 It's a digital key that allows you to download Laser Disco Defenders directly to PC from the official Platforms.

How can I find the best prices for Laser Disco Defenders CD keys?

Allkeyshop.com compares the cheapest prices of Laser Disco Defenders on the digital downloads market to find the best sales and discount codes on trusted stores.

Laser Disco Defenders is an action video game developed by Out of Bounds and published by Excalibur Games. Bringing back the music of the disco era.

Randomly generated levels will give you so much interesting gameplay. And an interesting thing about the game is that every time you shoot out your lasers, it ricochetes back and possibly hit you.

Get to enjoy the colorful, flashy graphics and the 70’s fashion and disco music. Be the “master of the dance floor” in the online leaderboards.

Get your 70’s groove on and play Laser Disco Defenders.

Zoom 1m 3m 1y All
Track product
EU STEAM CD KEY: Requires an EUROPEAN IP address or you must activate it with a VPN (Virtual Private Network) in order to play Laser Disco Defenders. Might have languages restrictions or language packs. Read the description on the store game page to know if the EU IP is only needed for activation or for playing also (maybe on EU Servers). Most of the stores offer you their help, or show you how to do this with a tutorial to follow.
STEAM CD KEY : Use the Steam Key Code on Steam Platform to download and play Laser Disco Defenders. You must login to your Steam Account or create one for free. Download the (Steam Client HERE). Then once you login, click Add a Game (located in the bottom Left corner) -> Activate a Product on Steam. There type in your CD Key and the game will be activated and added to your Steam account game library.
Standard Edition
Compare Choose & Buy Download (743)