October 2016 Game Release: The Most Awaited Games of the Year! 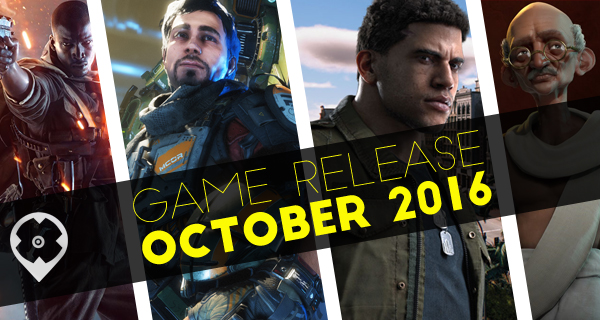 The year’s most awaited games are coming! Our October 2016 Game Release List is packed with the biggest games such as Battlefield 1, Titanfall 2, Mafia 3, and Civilization 6.

Which of these games do you have your eye on? Let us know in the comments!

Play as the vengeful spirit Aragami who has the power to control the shadows! Summoned by a mysterious girl named Yamiko, your goal is to rescue her. As a stealth game, you can use the shadows to your advantage and fight off Kaiho and the army of Light. Become invisible by creating your own shadows! Jump from one shadow to another and effectively hunt down your targets! You are also given the power to choose the outcome of the story. Which path will you choose?

Build your own business empire! In Industry Manager Future Technologies, you’ll get to create over 200 new products and resources, and even innovate your own technologies and products. This simulation game will definitely keep you busy for hours!

Enter the world of Lincoln Clay in New Bordeaux as he exacts revenge over the Italian Mafia who killed his mafia family. Help Clay build his new mafia family. Take on enemies in intense gun fights and hand-to-hand combats. Score awesome rides and cruise through New Bordeaux in style. Check all of these out once Mafia 3 hits store shelves!

Celebrate Tomb Raider’s 20th year with the Rise of the Tomb Raider 20 Year Celebration on the PS4! This release includes the critically-acclaimed Rise of the Tomb Raider plus a new single player content called “Blood Ties”. It also has Virtual Reality (VR) support, as well as a new Co-Op Play for Endurance Mode. The main campaign also has an Extreme Survivor difficulty setting. You’ll also get a 20 year celebration outfit and gun, plus 5 Lara skins. Also included are all previously released DLCs for the game.

Shadow Warrior 2 is a first-person shooter game set five years after the 2013 game, Shadow Warrior. You will take on the role of Lo Wang, a ninja warrior who will take on demon armies that have invaded the world which were sent by the Zilla from another dimension.

Take on the role of John Yesterday as he tries to correct an alchemic ritual which brings him back to life each time he dies, but with no memory of the past. You will be joined by your immortal partner, Pauline Petit. To be able to bring yourself back to life without losing your memory, you and Pauline will have to search for an artifact which you will use during the ritual.

Crazy Machines 3 is back, and it is crazier than ever! Build your own machines using over 200 objects and over 300 parts. Create and experiment using different colors and materials. Solve physics-based puzzles. All these, and so much more are what  awaits you in Crazy Machines 3!

Take your Battlefield experience to a whole new level of combat in Battlefield 1! Set during World War I, you’ll get to experience using weapons, vehicles, and battle gear of the period. You can also look forward to its 64-player multiplayer mode as well as its single-player campaign.

The newest game in the Civilization franchise comes with new and exciting features that will surely keep you playing for hours. One of the notable improvements are its cities which can now physically expand across the map. Unlock boosts so you can go and speed up your civilization’s progress through history. Its Dynamic Diplomacy also allows you to interact with other civilizations depending on the time period. Other features include an expanded multiplayer mode, new tutorial systems, and combining similar units to form more powerful Corps units.

Farming Simulator 17 promises players the “most complete farming simulator experience”. Enjoy over a hundred acres of land, more than 250 authentic vehicles and equipment from more than 75 manufacturers. Many types of crops are also waiting to be harvested, including, for the first time, sunflowers and soybeans. Take care of your livestock and take part in forestry to sell your products and expand your farm. You can also enjoy playing in 16-player cooperative multiplayer, or even download mods created by other players!

Go snowboarding with the pros in Mark McMorris Infinite Air! The experience is as real as it can get with its fluid analog controls and physics-driven animations capturing the true feel of snowboarding. Challenge your friends in real-world events, and explore an infinite number of mountains with its procedurally generated environment. Create your own course and share it with your friends online, too!

Dragon Ball Xenoverse 2 features more enhanced graphics with its next-gen visuals and more character customization choices. The game also now has a brand new city hub which is 7x the size of the original game – 300 players can all be online at the same time!

Titanfall 2 is going to bring new content to fans of the previous game. First off is its single-player story campaign of a Pilot and his Titan. Seven new gameplay mechanics have been added to the game as well as a progression system that is similar to the first game but with more weapons and weapon customizations included. The game’s skill system has also been improved, matchmaking is enhanced, and players can finally build a Network, which is similar to a guild.