Blizzard released a new Overwatch Developer Update featuring Jeff Kaplan, the game’s director. The video is about nine minutes long with Kaplan talking about the game’s upcoming features included in the patch.

One of which is the custom game mode. This will allow players to set their very own rules depending on their preference. They are allowed to change the setting for the many maps available, as well as for heroes and modes making your very own customized Server Browser. This for right now is available in the game’s Public Test Realm.

Also, if you’ve played Capture The Rooster in the game’s seasonal event and absolutely loved it! Good news is that Capture The Flag is here to stay! This is now available as part of the Custom Game and is available to be played in 12 of the game’s maps.

Go ahead and watch the full Developers Update below and get to know the complete details of the update.

What do you think of being able to play Capture The Flag all year round after the Year of the Rooster Event? Tell us your thoughts in the comments below. 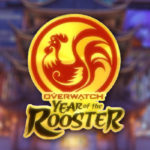 Overwatch Year of the Rooster Event Has Commenced!

The newest Seasonal Event for Overwatch is the Year of the Rooster Event! Like other seasonal events this will include great new cosmetic items as well as a new gameplay mode!