Bioware has released a Mass Effect Andromeda cinematic trailer recently. The trailer gives a great introduction to what the game is all about. Although no gameplay is introduced, it will give you an idea about the game’s story.

Your mission is to search the universe of Andromeda for a “New Earth”, another location which can support human life. You and your crew will be onboard your ark called Hyperion. The video will also give you a glimpse of your enemy, the alien Archon, the leader of the antagonistic race. You can check all these out on the cinematic video below:

Shortly after the cinematic trailer introduction of Mass Effect Andromeda, a new video was shared. This time it introduces the crew of the Hyperion in more detail. You are a part of the Human Pathfinder Team. You will be introduced to the Pathfinder Alec Ryder, Crisis Response Specialist Liam Costa, the brother and sister Scott and Sarah Ryder who are new recruits and are the children of Alec Ryder, Cora Harper the Operation’s Specialist, and S.A.M or Simulative Adaptive Matrix the implant AI of the Pathfinder Task Force. Know them better in the video trailer below: 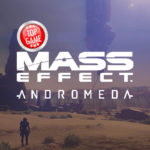 Know how you can play Mass Effect Andromeda earlier than the official release date!