Enter the World of The Binding of Isaac Rebirth Afterbirth!

Get ready for Afterbirth! The newest DLC for The Binding of Isaac will be up and ready for you to play and it is duly called Afterbirth!

Once again get the chance to play as Isaac as he traverses deep into the basement escaping his mother, who, hearing the voice of God, demands her to sacrifice her son, Isaac, to prove her faith. As you journey on and travel from room to room you will encounter strange enemies, help Isaac overcome his enemies as well as his greatest fears.

The Binding of Isaac Rebirth Afterbirth is an action shooter RPG with randomly generated rooms with a mix of heavy rouge-like elements. Collect treasures and discover hidden secret rooms. Shoot your way through strange creatures with your ultimate goal in mind- your own safety!

This massive expansion will definitely give you additional 100-200 hours of gameplay with all its new content!

Make sure to make room for more stuff as new item pick-ups, cards, pills, bombs and chests will be made available – there will be about 120 new items to look forward to.

Change how you play the game with the full new game mode called the Greed Mode that focuses on risks and rewards. Face 10 new striking challenges that will keep you on your toes at all times. A new alternate final chapter with new bosses will be waiting for you as well. As you progress through the game, there will be familiar enemies as well as new ones. Play through the entire game and unlock all the possible endings there is. 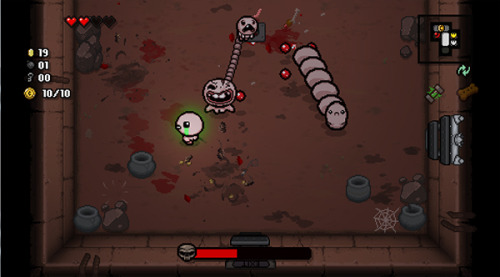 Feast your eyes on 1000+ new room designs. Also, introducing the irregular rooms that you will be encountering all throughout the game. Some rooms will be longer than the other, some will have an “L” shape rooms. New room types will be trap rooms, double treasure rooms and ultra rare closets.

Daily Runs, which are new official runs, will be made available everyday and online Leaderboards will post your ranking. New co-op babies and new transformations of Isaac will be seen. Updated combo weapon system will give you endless possibilities and the game will also feature an alternate expanded soundtrack.

Also a new playable character will be made available: Lilith, the mother of evil.

With everything new with The Binding of Isaac Afterbirth, you will definitely have a whole lot of playing and enjoyable hours to be done. In addition to all these new stuff, a free update will also be available for Rebirth (but only for people who own the Wrath of the Lamb). You can look forward to lots of bug fixes, modded bosses and a whole lot more!

very good site to win free games.please keep it up