Doomfist Hints Are All Over the Overwatch PTR!

Doomfist has been rumored as the next character coming out in Overwatch. Having no word of confirmation from Blizzard did not stop players from creating a buzz on the possible inclusion of Doomfist as one of the characters in Overwatch.

The Public Test Region is abuzz with Doomfist “hints” found by players. A video created by Youtuber Arrekz has got it all covered. One of the hints discovered is the unfinished model of a payload found on the Numbani map. Doomfist’s gauntlet is found within its glass container.

Another hint featured on the video is the main menu music in the Public Test Region. Quick-witted players were able to notice how different the PTR “feels” with the main menu’s music. Players who also took the time datamining the game also found out that this new music is Doomfist’s theme. The said theme appeared on the Overwatch cinematic trailer back in 2014 and was used as a Doomfist exclusive. Reports also say that the gauntlet found in the cinematic trailer matches the one found in the payload model.

A lot more hints are featured in the video by Arrekz below: 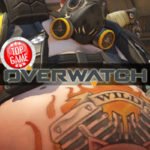 Overwatch Newest PTR Patch Is For Roadhog And Winston

The Overwatch newest PTR patch has some balancing updates from Roadhog and Winston. Know what the patch is all about in the list that we have.