Destroy All Humans Launches Next Month 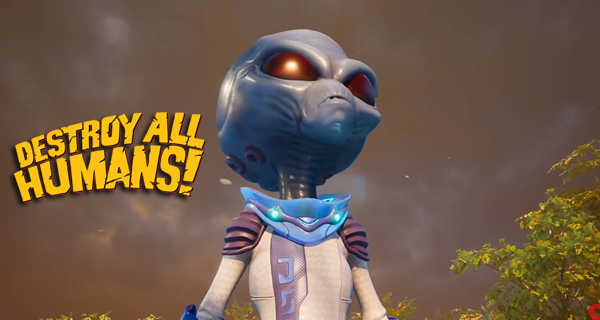 The Remake of Destroy All Humans launches in July!

The cult classic, Destroy All Humans! is set to have its remake release and ahead of the launch THQ Nordic and Black Forest Games have dropped a trailer showing off a little of the gameplay that you can expect to see when the game releases.

The Welcome to Turnipseed Farm trailer for Destroy All Humans! sees Crypto landing his UFO in a farm and manipulating some cows with telekinesis, before throwing them, and then moving onto destroying humans by electrocuting them. Crypto then lifts off the farm in his UFO before setting the field ablaze.

Destroy All Humans! became an instant hit with fans due to its perfect blend of humor and violence, and those familiar with the series will be glad to see the same style of gameplay in the latest trailer.

If you haven’t seen the gameplay yet, we have it below for you:

For those that can’t wait to get their hands on the game, don’t forget there is a demo available now on GOG that you can download and play through. The demo features the first mission of the game, as well as bonus a challenge mission, and is between 20-30 minutes long.

The original Destroy All Humans! released June 21, 2005, for PlayStation 2, and Xbox, and features Cyptosporidium 137 (Crypto) as the main character, a warrior and member of the Furons, a race of extraterrestrials dedicated to seizing new worlds through conquest.

GOG.com describes the remake as below:

Destroy All Humans! is the remake that fans of this cult game, now a classic, have been waiting for. This demo offers an overview of what makes this alien invasion game tinged with black humor one of the most beloved adventure and action games of all time:

Destroy All Humans launches July 28, 2020, and will be available for PlayStation 4, Xbox One, and PC.

Never played the original but this remake looks pretty good. Reminds me of when Insomniac remade the original ratchet and clank in 2016.