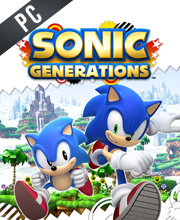 What is Sonic Generations CD key?

It's a digital key that allows you to download Sonic Generations directly to PC from the official Platforms.

How can I find the best prices for Sonic Generations CD keys?

Allkeyshop.com compares the cheapest prices of Sonic Generations on the digital downloads market to find the best sales and discount codes on trusted stores.

Sonic Generations is an action platformer videogame developed by Devil’s Details and published by Sega. The players control Sonic the Hedgehog in two forms: Classic and Modern, in which their main objective is to collect the seven Chaos Emeralds, free their friends and uncover the mystery behind the Time Eater, a mysterious entity who creates time holes.

The game features levels derived from 20 years of Sonic history, spreading across three eras, each having three stages and two bosses from previous games: Classic, Dreamcast and Modern, which are played as either Classic Sonic or Modern Sonic. Classic Sonic’s levels are strictly two dimensional side scrolling stages, using classic moves like the Spin Attack and Spin Dash, while Modern Sonic’s levels follow the 2D/3D style gameplay of Sonic Unleashed and Sonic Colors, featuring techniques such as boosting and homing attacks.

As well as classic power-ups such as Invincibility and Speed Shoes, certain levels have unique power-ups, such as skateboards in City Escape and Wisp powers in Planet Wisp.

Classic and Modern Sonic begin the game with five lives, which are lost when they suffer any type of damage with no rings in their possession, or fall into a pit or drown. More lives can be earned by getting 100 rings or finding a monitor (item box) that gives them an extra life. If the player runs out of lives, the “Game Over” screen will appear, in which the player can continue by selecting “Yes”.

EU STEAM CD KEY: Requires an EUROPEAN IP address or you must activate it with a VPN (Virtual Private Network) in order to play Sonic Generations. Might have languages restrictions or language packs. Read the description on the store game page to know if the EU IP is only needed for activation or for playing also (maybe on EU Servers). Most of the stores offer you their help, or show you how to do this with a tutorial to follow.
STEAM GIFT : A Steam gift is a one-time transfer you receive. You activate and install Sonic Generations to play on Steam, it is a non-refundable game that stays in your Steam games collection. Please read the store description about any language or region restrictions.
STEAM CD KEY : Use the Steam Key Code on Steam Platform to download and play Sonic Generations. You must login to your Steam Account or create one for free. Download the (Steam Client HERE). Then once you login, click Add a Game (located in the bottom Left corner) -> Activate a Product on Steam. There type in your CD Key and the game will be activated and added to your Steam account game library.
STEAM KEY ROW : It means for Rest Of the World countries which are not concerned by the region restrictions. This product can't be purchased and activated in Several countries. Please read the store description to know the full list of countries which are concerned. Use the key to Download and play Sonic Generations on Steam.
Collection
Standard Edition