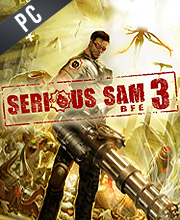 It's a digital key that allows you to download Serious Sam 3 BFE directly to PC from the official Platforms.

How can I find the best prices for Serious Sam 3 BFE CD keys?

Allkeyshop.com compares the cheapest prices of Serious Sam 3 BFE on the digital downloads market to find the best sales and discount codes on trusted stores.

Like previous titles in the series, Serious Sam 3: BFE involves fighting against many hordes of enemies in wide-open environments. However Serious Sam 3 has more closed environments than its predecessors, particularly in the early levels. There are also a larger number of enemies that can attack the player from a distance.

The player can carry an unlimited amount of weapons, including a mini-gun, rocket launcher, assault rifle and a cannon. There are 13 weapons total, 5 of them have a manual reload. The signature close-combat weapons from the first game, the knife and chainsaw, have been replaced with a sledgehammer with three modes of attack (vertical strike, 180 turn and full 360 turn).

PUBLISHER WEBSITE CD KEY: Use the CD Key Code to download directly on the Official Website or from the store to play Serious Sam 3 BFE. Follow the instructions given by the store. Verify languages available and possible region restrictions before buying.
EU STEAM CD KEY: Requires an EUROPEAN IP address or you must activate it with a VPN (Virtual Private Network) in order to play Serious Sam 3 BFE. Might have languages restrictions or language packs. Read the description on the store game page to know if the EU IP is only needed for activation or for playing also (maybe on EU Servers). Most of the stores offer you their help, or show you how to do this with a tutorial to follow.
EUROPEAN STEAM GIFT : It’s a steam gift for Europe which requires an European IP address to activate and to play Serious Sam 3 BFE on Steam. Read carefully the store description about region and language restrictions.
STEAM GIFT : A Steam gift is a one-time transfer you receive. You activate and install Serious Sam 3 BFE to play on Steam, it is a non-refundable game that stays in your Steam games collection. Please read the store description about any language or region restrictions.
STEAM CD KEY : Use the Steam Key Code on Steam Platform to download and play Serious Sam 3 BFE. You must login to your Steam Account or create one for free. Download the (Steam Client HERE). Then once you login, click Add a Game (located in the bottom Left corner) -> Activate a Product on Steam. There type in your CD Key and the game will be activated and added to your Steam account game library.
Bonus Edition
Bundle
Complete Pack
Deluxe Edition
Gold Edition
Standard Edition

Pretty fun and fast paced non stop action. I was really impressed by this game and would recommend it for sure. Also as a side not, the soundtrack Syrian Complex is something I can listen to for hours on end.

Serious Sam 3 is a bit fantastic and a little absurd game. Just shot and enjoy.

Hhhh so nistalgy cant believe that it .still on sell.

When I played this. It felt like classic doom but with modern graphics and animations