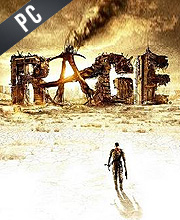 What is Rage CD key?

It's a digital key that allows you to download Rage directly to PC from the official Platforms.

How can I find the best prices for Rage CD keys?

Allkeyshop.com compares the cheapest prices of Rage on the digital downloads market to find the best sales and discount codes on trusted stores.

Rage is a first-person shooter videogame developed by id Software.

A semi-open world with breathtaking graphics powered by id’s revolutionary id Tech 5 technology, semi-linear FPS action game set in a post-apocalyptic near future after the asteroid 99942 Apophis impacts the Earth leaving the world ravaged and jam-packed with driving, shooting and fighting.

You are a survivor of a post-apocalyptic world, battling bandits and mutants at first until you are dragged into a resistance in war with a corrupted army of battle armor soldiers. This game has one linear main quest, and a number of side quests per main event. Each main quest involves you traversing an area like a city, dungeon, or even tunnels to find something or kill certain enemies you prefer dead.

EU STEAM CD KEY: Requires an EUROPEAN IP address or you must activate it with a VPN (Virtual Private Network) in order to play Rage. Might have languages restrictions or language packs. Read the description on the store game page to know if the EU IP is only needed for activation or for playing also (maybe on EU Servers). Most of the stores offer you their help, or show you how to do this with a tutorial to follow.
STEAM GIFT : A Steam gift is a one-time transfer you receive. You activate and install Rage to play on Steam, it is a non-refundable game that stays in your Steam games collection. Please read the store description about any language or region restrictions.
STEAM CD KEY : Use the Steam Key Code on Steam Platform to download and play Rage. You must login to your Steam Account or create one for free. Download the (Steam Client HERE). Then once you login, click Add a Game (located in the bottom Left corner) -> Activate a Product on Steam. There type in your CD Key and the game will be activated and added to your Steam account game library.
Bonus Edition
Bundle
Limited Edition
Standard Edition