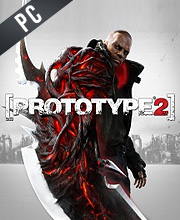 What is Prototype 2 CD key?

It's a digital key that allows you to download Prototype 2 directly to PC from the official Platforms.

How can I find the best prices for Prototype 2 CD keys?

Allkeyshop.com compares the cheapest prices of Prototype 2 on the digital downloads market to find the best sales and discount codes on trusted stores.

Prototype 2 is an open world action–adventure video game developed by Canadian studio Radical Entertainment and published by Activision and is the sequel to 2009’s Prototype.

So this time it’s yet again your turn to stop “Blackwatch” and the infection going on in “NYZ”; but this time you are playing the role of the ex-military James Heller. Sgt James Heller’s incredible new Tendril power lets you lift and tear apart cars and military vehicles, ensnare powerful infected beasts and even rip large groups of enemies to shreds.

It also features a great mix-n-match of new Mutation perks into their ultimate Prototype for more character optimization. Not only that, it unleashes the power of unparalleled technology of Radical’s proprietary ‘Titanium 2.0’ engine. Prototype 2 will redefine gamers’ expectations of over-the-top open world action.

Prototype 2 is a great game that features very good graphics animation physics and awesome gameplay. It can be played at full settings and looks gorgeous in full HD!  The gameplay stays more or less the same as in the first one with further improvements and a combat system to die for.

It’s just too much fun running, flying, slashing ,beating or body surfing your way through the city with an endless amount of ways to kill people, new monsters and tons of side missions that can keep you busy for a good while.

Bonus: Protoype + Protoype 2 (Can be different or change over time for each seller. Please refer to the seller’s website)

Zoom 1m 3m 1y All
Track product
EU STEAM CD KEY: Requires an EUROPEAN IP address or you must activate it with a VPN (Virtual Private Network) in order to play Prototype 2. Might have languages restrictions or language packs. Read the description on the store game page to know if the EU IP is only needed for activation or for playing also (maybe on EU Servers). Most of the stores offer you their help, or show you how to do this with a tutorial to follow.
STEAM GIFT : A Steam gift is a one-time transfer you receive. You activate and install Prototype 2 to play on Steam, it is a non-refundable game that stays in your Steam games collection. Please read the store description about any language or region restrictions.
STEAM CD KEY : Use the Steam Key Code on Steam Platform to download and play Prototype 2. You must login to your Steam Account or create one for free. Download the (Steam Client HERE). Then once you login, click Add a Game (located in the bottom Left corner) -> Activate a Product on Steam. There type in your CD Key and the game will be activated and added to your Steam account game library.
Bonus Edition
Collection
Franchise Pack
Radnet Edition
Standard Edition
Compare Choose & Buy Download (803)

nice game.. too bad there wont be any other sequels….