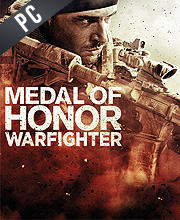 What is Medal of Honor Warfighter CD key?

It's a digital key that allows you to download Medal of Honor Warfighter directly to PC from the official Platforms.

How can I find the best prices for Medal of Honor Warfighter CD keys?

Allkeyshop.com compares the cheapest prices of Medal of Honor Warfighter on the digital downloads market to find the best sales and discount codes on trusted stores.

Medal of Honor: Warfighter is a first-person shooter videogame developed by Danger Close Games and published by Electronic Arts.

This personal story was written by Tier 1 Operators while deployed around the world. In it, players assume the roles of these warfighters and apply unique skill sets to track down a genuine global threat, in real international locations, sponsored by real enemies.

Medal of Honor Warfighter runs in Frostbite 2, which is the next generation of technology today. Not only that, it connects dotted lines to real global terror events. Warfighter is a great game that shooter fans everywhere can really enjoy. Great sound and visuals, an amazing multiplayer, this game is one hell of a package.

i think that people are more interested in graphics that in the fun in the game itself. lots of complains about the IA and such but this is one of the best games that i ever saw. just my opinion.﻿

really good game and the price is fair , best deal on G2Play

g2a is the best site to buy games , i like it

cheap and amazing!, Game is complitly worth money 5$ and more!..
Great FPS!
And good graphics!

I recommend the game!

Great game, medal of honor multiplayer wasn’t so good but they fixed it in medal of honor warfighter. Singleplayer is so good… finished game like 3-5 times. Great game !