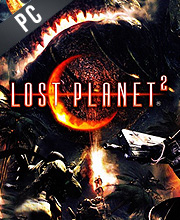 What is Lost Planet 2 CD key?

It's a digital key that allows you to download Lost Planet 2 directly to PC from the official Platforms.

How can I find the best prices for Lost Planet 2 CD keys?

Allkeyshop.com compares the cheapest prices of Lost Planet 2 on the digital downloads market to find the best sales and discount codes on trusted stores.

Lost Planet 2 is an action–adventure video game developed and published by Capcom. This is the sequel to Lost Planet: Extreme Condition.

The story is set in the planet E.D.N. III, and 10 years has already passed from the previous game. The once icy planet of E.D.N. III now shows sign of vegetation like a jungle as well as a desert. The snow has melted and the frozen regions are no more. It all begins as some mercenaries were taken by the squad leaders to a jungle attempting to destroy a mine.

While on that mission, a Category G- Akrid appeared. They defeated the monster and pushed through to the rendezvous point where another Category G Akrid appears. They are saved by a helicopter passing by and finds out that the whole thing was a set up and the others are dead. Continuing in the game will reveal the rest of the story.

Features of the game are very similar with the previous game. A big difference is that since the snow has melted and the temperatures are not freezing anymore, the Thermal Energy to control a Vital Suit is no longer getting depleted. It will lessen though if you use a weapon using Thermal Energy. You can now also hitch a ride with the Vital Suit – two persons per side. Special Vital Suits would also have the ability to fly.