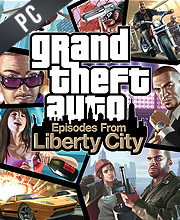 It's a digital key that allows you to download Grand Theft Auto Liberty City directly to PC from the official Platforms.

How can I find the best prices for Grand Theft Auto Liberty City CD keys?

Grand Theft Auto Episodes from Liberty City is an action game developed by Rockstar North and published by Rockstar Games. It is a standalone compilation of GTA 4 episodes which includes The Lost and Damned and The Ballad of Gay Tony.

In the Lost and Damned, you take the role of Johnny, vice president of Liberty City’s most fearsome biker gang. A power struggle when the head of the Lost decided it is time for the gang to deal drugs.

The Ballad of Gay Tony is the last episodic content for GTA 4. You play as Luis Lopez, manager of the largest dance club in Liberty City owned by “Gay Tony” Prince. Financial situation goes down and you are off to find a stolen diamond. Those were the same stolen diamond found in GTA 4 and Lost in the Damned. Gay Tony’s story runs in parallel with those two and you will find out what really happened to those diamonds in the end.

The missions include helicopter fights, shooting down helicopters on moving trains, and even blowing up crooked cops. You have powerful weapons like the sticky bomb and the shotgun. Also, a tank is added as new feature to the game. There other new features to look forward to!

This DLC is definitely worth to get especially if you own GTA 4. It contains 2 interesting story which are part of the events of GTA 4