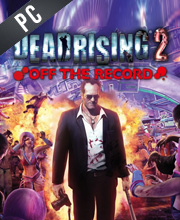 What is Dead Rising 2 Off The Record CD key?

It's a digital key that allows you to download Dead Rising 2 Off The Record directly to PC from the official Platforms.

How can I find the best prices for Dead Rising 2 Off The Record CD keys?

Allkeyshop.com compares the cheapest prices of Dead Rising 2 Off The Record on the digital downloads market to find the best sales and discount codes on trusted stores.

Dead Rising 2: Off the Record is an action–adventure, open world, survival, horror, beat ’em up video game is developed by Capcom Vancouver and published by Capcom. Introducing an all new Dead Rising 2 experience. “Frank West is back in the game!”

The photojournalist and original hero of Dead Rising series indulges in yet another unique story and missions filled with action-packed confrontations with new enemies and more psychotic villains. The hero arrives with new crazy and hilarious combo-weapons to help him get through the missions. Guide Frank West as he deals with a reimagining of the Fortune City outbreak.

Set out on a bloody adventure in “Uranus Zone,” Fortune City’s very own sci-fi inspired theme park full of deadly rides and attractions. A true zombie-killing paradise. Dead Rising recognizes the humour that you can bring to a dark scenario- like launching fireworks from a lead pipe and slaughtering inordinate amounts of zombies while choosing whatever you want to wear!

The system enhancements, upgrades and improvements in this installment creates a smoother, faster a very enjoyable Dead Rising.

Zoom 1m 3m 1y All
Track product
EU STEAM CD KEY: Requires an EUROPEAN IP address or you must activate it with a VPN (Virtual Private Network) in order to play Dead Rising 2 Off The Record. Might have languages restrictions or language packs. Read the description on the store game page to know if the EU IP is only needed for activation or for playing also (maybe on EU Servers). Most of the stores offer you their help, or show you how to do this with a tutorial to follow.
STEAM GIFT : A Steam gift is a one-time transfer you receive. You activate and install Dead Rising 2 Off The Record to play on Steam, it is a non-refundable game that stays in your Steam games collection. Please read the store description about any language or region restrictions.
STEAM CD KEY : Use the Steam Key Code on Steam Platform to download and play Dead Rising 2 Off The Record. You must login to your Steam Account or create one for free. Download the (Steam Client HERE). Then once you login, click Add a Game (located in the bottom Left corner) -> Activate a Product on Steam. There type in your CD Key and the game will be activated and added to your Steam account game library.
STEAM KEY ROW : It means for Rest Of the World countries which are not concerned by the region restrictions. This product can't be purchased and activated in Several countries. Please read the store description to know the full list of countries which are concerned. Use the key to Download and play Dead Rising 2 Off The Record on Steam.
Bundle
Standard Edition
Compare Choose & Buy Download (759)