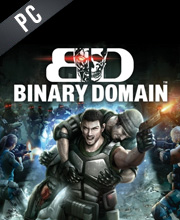 What is Binary Domain CD key?

It's a digital key that allows you to download Binary Domain directly to PC from the official Platforms.

How can I find the best prices for Binary Domain CD keys?

Allkeyshop.com compares the cheapest prices of Binary Domain on the digital downloads market to find the best sales and discount codes on trusted stores.

Binary Domain is an action, third-person shooter video game that is developed by Devil’s Details and published by SEGA.

This is the Machine Age where everything is controlled by robots.The year is 2080 and global warming has melted the icecaps and caused a world wide flooding. The government tried to rebuild above the water using the cities that were under the water as its foundation. A lot of people died in the flooding leaving the robots as the main workforce at that age.

An American company named Bergen is the world’s largest robotic industry at the time, making it the most powerful country in the world. Another corporation named Amanda which is a Japanese corporation tried suing Bergen accusing them of stealing their technology. Bergen having great influences won.

At that same timeframe a “New Geneve Convention” a new set of international law has passed a new law banning research into robots and making them pass like humans called “Hallow Children”. A new global task-force was built in coordination with this law, the International Robotics Technology Association or better known as “ Rust Crews”. They will be the organization that will be dealing with anybody who breaches the convention.

After sometime an android attacked Bergen. Believing it is the doing of Amanda the Rust Crews were sent to Japan to investigate. The Rust Crew is equipped with high technology weapons and armor and you can add a special skill set that would benefit you. A consequence system is also available where in your choice of actions affect everything in the game.

Check out this awesome game set in a futuristic Tokyo, complete incredible missions tasked to you.

Zoom 1m 3m 1y All
Track product
EU STEAM CD KEY: Requires an EUROPEAN IP address or you must activate it with a VPN (Virtual Private Network) in order to play Binary Domain. Might have languages restrictions or language packs. Read the description on the store game page to know if the EU IP is only needed for activation or for playing also (maybe on EU Servers). Most of the stores offer you their help, or show you how to do this with a tutorial to follow.
STEAM GIFT : A Steam gift is a one-time transfer you receive. You activate and install Binary Domain to play on Steam, it is a non-refundable game that stays in your Steam games collection. Please read the store description about any language or region restrictions.
STEAM CD KEY : Use the Steam Key Code on Steam Platform to download and play Binary Domain. You must login to your Steam Account or create one for free. Download the (Steam Client HERE). Then once you login, click Add a Game (located in the bottom Left corner) -> Activate a Product on Steam. There type in your CD Key and the game will be activated and added to your Steam account game library.
Bonus Edition
Bundle
Collection
Standard Edition
Compare Choose & Buy Download (791)

Probably one of the most underrated games ever, it’s worth to be played. For less than 3€ it’s a must buy.