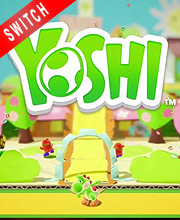 What is Yoshi Game Code?

It's a digital key that allows you to download Yoshi directly to Nintendo Switch directly from Nintendo eShop.

How can I find the best prices for Yoshi on Nintendo Switch ?

Allkeyshop.com compares the cheapest prices of Yoshi on the digital downloads market to find the best sales and discount codes on trusted stores.

Yoshi Nintendo Switch is an action, platformer video game that is developed by Good-Feel and published by Nintendo.

Get to play as the adorable Yoshi in a different type of side-scrolling game. The characters that you will be playing are in 3D and you will be moving around on a 2D plane.

Yoshi’s world will be huge and is decorated in a totally new art style. One thing that is majorly different with this one is that it will have a flipside, it will be a different view of the map which can be accessed when Yoshi stomps on the ground.

Other mechanics of the game are similar to the previous Yoshi games where Yoshi is able to eat enemies or the other objects with his tongue or spit them out or turn them into eggs.

You can play with a friend in the two-player multiplayer mode where you and your friend would get to control your own Yoshi’s and go through the game’s stages together.

BOX GAME : This is Yoshi Nintendo Switch Box Edition (DVD-CD ROM). This is not a downloadable product. Please read the sellers page for any additional costs (taxes, shipping), delivery time for your country and languages available.
NINTENDO CODE : This is a digital code for Yoshi Nintendo Switch. Use the download code on the Nintendo eShop of your Console. Once connected to the Nintendo eShop, you can enter and redeem the Download Code. Read carefully the store description about any language and region restrictions.
Standard Edition

Look at those bright and sunny visuals, game looks beautifully made for the 2D genre!

Hello there,
Yoshi Nintendo is very good game really i love it.