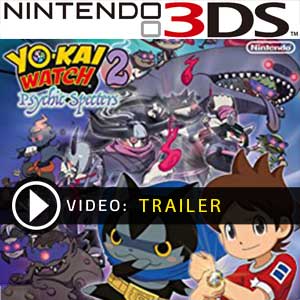 It's a digital key that allows you to download YO-KAI WATCH 2 Psychic Specters directly to Nintendo 3DS directly from Nintendo eShop.

How can I find the best prices for YO-KAI WATCH 2 Psychic Specters on Nintendo 3DS ?

Allkeyshop.com compares the cheapest prices of YO-KAI WATCH 2 Psychic Specters on the digital downloads market to find the best sales and discount codes on trusted stores.

Yo-Kai Watch 2: Psychic Specters is a role-playing video game that is developed by LEVEL-5 and published by Nintendo. This is the third edition of the Yokai Watch 2 series. The first being Bony Spirits and the next Fleshy Souls.

This is the ultimate Yo-Kai Watch experience! A time-traveling adventure is in the palm of your hands with the strange and friendly troublemakers – the Yo-Kai.

The Yo-Kai have been hiding due to life’s troubles. And it is up to you to find them! Travel to the beautiful San Fantastico seaside town or to Harrisville, a quint and sleepy village and other locations. Your adventure will start in Springdale and there will be about 350 Yo-Kai for you to discover. Create your team of 6 Yo-Kai in order to fight against the troublesome Yo-Kai. Be the peacekeeper and finally end the civil war between the different Yo-Kai factions.

New features include the ability to befriend Yo-Kai from Wicked Tribe and the Boss Yo-Kai. New quests, as well as a new Yo-Kai Watch Blasters local co-op mode, is added with new and powerful bosses!

Also, if you own the Yo-Kai Watch 2: Bony Spirits or the Yo-Kai Watch 2: Fleshy Souls, game data can be transferred and you will be able to play where you left off. Additional exclusive dungeons, strong bosses and special Yo-Kai can also be unlocked.