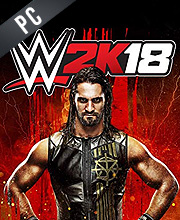 It's a digital key that allows you to download WWE 2K18 directly to PC from the official Platforms.

How can I find the best prices for WWE 2K18 CD keys?

Allkeyshop.com compares the cheapest prices of WWE 2K18 on the digital downloads market to find the best sales and discount codes on trusted stores.

WWE 2K18 is a sports simulation video game developed by Visual Concepts and Yuke’s Co., LTD and published by 2K. This is the nineteenth game to come out of the WWE game series.

This is the most realistic WWE video game that you will get! Featuring deep creation capabilities, additional match types, new game mods, stunning graphics, excitement, action, and drama. Experience an intense game with new features like eight-man matches, a new grapple carry system, new weight detection, thousands of new animation as well as a massive backstage area. A visual overhaul is also available thanks to the new rewarding engine for the game.

Check out the MyCareer experience where you will go through the path of greatness into the journey to Wrestle Mania. This can be done with free roaming, talks with other WWE Superstars, making aliens as well as creating enemies and much more.

Be a part of the WWE Hall of Fame with your MyPlayer in the Road to Glory. Compete with other players online and top the charts. Earn unlockables, boosts, and upgrades in the Special Events.

STEAM EMEA KEY : What is Steam Key EMEA signification? EMEA means for Europe, Middle East and Africa and several other countries. Please read the store description about country and language restrictions to know which are concerned. Use the key to Download and play WWE 2K18 on Steam.
EU STEAM CD KEY: Requires an EUROPEAN IP address or you must activate it with a VPN (Virtual Private Network) in order to play WWE 2K18. Might have languages restrictions or language packs. Read the description on the store game page to know if the EU IP is only needed for activation or for playing also (maybe on EU Servers). Most of the stores offer you their help, or show you how to do this with a tutorial to follow.
EUROPEAN STEAM GIFT : It’s a steam gift for Europe which requires an European IP address to activate and to play WWE 2K18 on Steam. Read carefully the store description about region and language restrictions.
STEAM CD KEY : Use the Steam Key Code on Steam Platform to download and play WWE 2K18. You must login to your Steam Account or create one for free. Download the (Steam Client HERE). Then once you login, click Add a Game (located in the bottom Left corner) -> Activate a Product on Steam. There type in your CD Key and the game will be activated and added to your Steam account game library.
STEAM KEY ROW : It means for Rest Of the World countries which are not concerned by the region restrictions. This product can't be purchased and activated in Several countries. Please read the store description to know the full list of countries which are concerned. Use the key to Download and play WWE 2K18 on Steam.
Dayone Edition
Deluxe Edition
Standard Edition

the last WWE game I played was WWE 2008. I can’t believe that 10 years have already passed since then..

The game is still super expensive. I’m going t wait till it gets cheaper.

in my opinion cdkeys.com is the best place to buy this game online, cheapest price and its safe

this is the best game guys. its my pleasure to play it. go guys buy it to play together

it has the best amazing graphics and gameplay, you can buy it now with best price. go guys