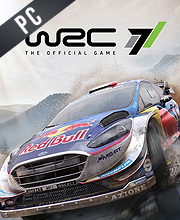 It's a digital key that allows you to download WRC 7 directly to PC from the official Platforms.

How can I find the best prices for WRC 7 CD keys?

Allkeyshop.com compares the cheapest prices of WRC 7 on the digital downloads market to find the best sales and discount codes on trusted stores.

Get to participate in the race of a lifetime with WRC 7 FIA World Rally Championship!

Great game. Compared to the last year’s installment we can see improvements in all aspects.

There has been just a cosmetic improvement in the impression of driving on good tracks, but otherwise it is still the same flat and boring song.

WRC 7: Porsche Car get to drive the legendary model that was driven by Romain Dumas – Porsche 911 GT3 RS R-GT. This is available in all game modes except the personalized Championship and Career.

EU STEAM CD KEY: Requires an EUROPEAN IP address or you must activate it with a VPN (Virtual Private Network) in order to play WRC 7. Might have languages restrictions or language packs. Read the description on the store game page to know if the EU IP is only needed for activation or for playing also (maybe on EU Servers). Most of the stores offer you their help, or show you how to do this with a tutorial to follow.
STEAM CD KEY : Use the Steam Key Code on Steam Platform to download and play WRC 7. You must login to your Steam Account or create one for free. Download the (Steam Client HERE). Then once you login, click Add a Game (located in the bottom Left corner) -> Activate a Product on Steam. There type in your CD Key and the game will be activated and added to your Steam account game library.
Collection
Standard Edition
Compare Choose & Buy Download (743)

Amazing prices, thanks for the info because I have saved money checking your price list first. Cheaper than Steam summer sales

i remember playing the old WRC games on a playstation 2 demo disk. I sucked horribly even on easier settings but it was very fun

First off all, This is a very immersive Game. Playing this with a steering wheel or with a Simulator on high graphics you do feel like your driving a car. The Game is also very fun to play and easy with any Setup. Good game for Beginners, Definetly worth it.

Good game cheap price! I like the rally cross. Recommanded!

Wow this is amazing way to buy games! I love that WRC 7 is this cheap! 🙂 Awesome!