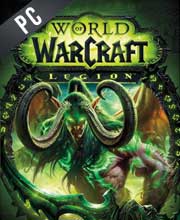 Find all Game Code stores and prices to download and play WoW Legion at the best price. Save time and money: Compare CD Key Stores. Activate WoW Legion CD Key on your Battle.net client to download the game and play in multiplayer.

When you add the Game Key on your Battle.net Client, the game will be added to your library, then you can download all your Battle.net PC videogames for free and at any time.

You can participate to these tests by adding comments about your digital download purchase in the store review page. Enjoy the best deals for WoW Legion CD Key with Allkeyshop.com!

World of Warcraft – Legion is a MMORPG video game published and developed by Activision Blizzard and Blizzard Entertainment.

This title is the sixth extension of the game World of Warcraft which has become a cult classic.

In this extension, which sees the return of the continent “The Broken Isles” including six regions (Suramar, Stormheim, Val’Sharrah, Azsuna The Broken Shore and High-Roc), the maximum level that can reached by a player is set to 110.

The big boss is here embodied by Sargeras and to deal with them, you get more old classes from that of Demon Hunter and a new customization system for your weapons and equipment. You will now perform class quests and interact with various NPC (non playable characters) to be able to improve your stuff.

The followers of the series will be delighted to find the disciples of Illidian through the Demon Hunter class and neophytes will directly benefit from this new possibility gameplay that complements a universe already comprehensive and appealing.

Note that the challenge was a tad high as to increase your level, you will now be forced to go through dungeons. Your turn to play!

BATTLENET EU CD KEY : European Battle.net Key to download and play WoW Legion on EUROPEAN SERVERS. You must Activate the CD Key on your Battle.net Account or create one for free (HERE). Then, once you login on the Website, click Account Management ==> Add a new game. Enter the Key Code in the field below to add it to your Battle.net account. Once added you can Download the game on any computer at any time.
DLC. (Downloadable content) It's an Add-on. You need the game in order to use it.

Be the first one to write a review about WoW Legion !

Legion is now included with base WoW accounts. Which means you don’t have to bother buying it anymore.

I should stay away from WoW, I don’t want to get addicted to it again hahahah

World of warcraft still rocks years after the original release.

This addition is woth a lot for us gamers because we can play a perfect game.