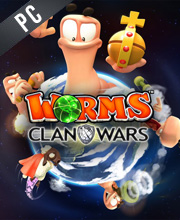 It's a digital key that allows you to download Worms Clan Wars directly to PC from the official Platforms.

How can I find the best prices for Worms Clan Wars CD keys?

Allkeyshop.com compares the cheapest prices of Worms Clan Wars on the digital downloads market to find the best sales and discount codes on trusted stores.

Part of the Worms series this latest version of the Worms series you can team up with friends and other Clan Worms players to create a undefeatable team. The object of the game is to defeat the other team by selecting a worm and whatever tool or weapon that is available and kill your opponents‘ worms.

When most of the weapons are used they affect the terrain in the area where they hit or land causing added challenges in strategy and destruction. These changes to terrain can be a detriment or used to your advantage with additional destruction.

There are now 65 different weapons and utilities included and over 200 customizations items for the worms. If you would like to create your own customized items you can import them into the game using Steam Workshop integration. For anyone wanting to play solo there are 25 different single player missions and five different environments. In campaign mode you also get access to the Worm Ops missions where you will find timed attack missions.

If you ever sat back and wondered what a war between worms would look like now is your opportunity to find out! A humorous setting and entertaining environment is sure to keep you and your friends in the grip of battle and laughs for hours to come.

Zoom 1m 3m 1y All
Track product
EU STEAM CD KEY: Requires an EUROPEAN IP address or you must activate it with a VPN (Virtual Private Network) in order to play Worms Clan Wars. Might have languages restrictions or language packs. Read the description on the store game page to know if the EU IP is only needed for activation or for playing also (maybe on EU Servers). Most of the stores offer you their help, or show you how to do this with a tutorial to follow.
STEAM GIFT : A Steam gift is a one-time transfer you receive. You activate and install Worms Clan Wars to play on Steam, it is a non-refundable game that stays in your Steam games collection. Please read the store description about any language or region restrictions.
STEAM CD KEY : Use the Steam Key Code on Steam Platform to download and play Worms Clan Wars. You must login to your Steam Account or create one for free. Download the (Steam Client HERE). Then once you login, click Add a Game (located in the bottom Left corner) -> Activate a Product on Steam. There type in your CD Key and the game will be activated and added to your Steam account game library.
Bundle
Collection
Pack X4
Standard Edition
Compare Choose & Buy Download (759)

Worms is the history of strategy game surely woth a try.

finally found this game, been searching for this for ages, cant wait to try it out

Great game for playing with friends. If you liked the old Worms, you will enjoy this one