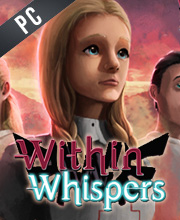 What is Within Whispers The Fall CD key?

It's a digital key that allows you to download Within Whispers The Fall directly to PC from the official Platforms.

How can I find the best prices for Within Whispers The Fall CD keys?

Allkeyshop.com compares the cheapest prices of Within Whispers The Fall on the digital downloads market to find the best sales and discount codes on trusted stores.

Within Whispers The Fall is an adventure indie game published and developed by  Thorium Studios.

War is often accompanied by death, destruction, suffering and uprooted relationships. In such a world where all is war and also grey, everything appears grim in the eyes of the downtrodden.

Contrary to the despair and depression spawns a beautiful and brave young woman by the name of Aska who will later prove to be a ray of sunshine for dwindling souls. You must lead her through despicable trenches and bloody battlefields in aid of those in need. Experience one of the most scarring wars of human history. Learn to loathe the stench of Word War One as you encounter stories of the condemned.

Become the personification of hope in a terror-infested world.

The game is single player with full controller support.

Within Whispers The Fall is set to be released in March 2019 on PC.

STEAM CD KEY : Use the Steam Key Code on Steam Platform to download and play Within Whispers The Fall. You must login to your Steam Account or create one for free. Download the (Steam Client HERE). Then once you login, click Add a Game (located in the bottom Left corner) -> Activate a Product on Steam. There type in your CD Key and the game will be activated and added to your Steam account game library.
Standard Edition