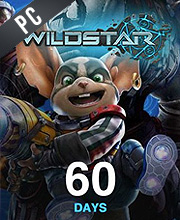 What is Wildstar 60 days CD key?

It's a digital key that allows you to download Wildstar 60 days directly to PC from the official Platforms.

How can I find the best prices for Wildstar 60 days CD keys?

Allkeyshop.com compares the cheapest prices of Wildstar 60 days on the digital downloads market to find the best sales and discount codes on trusted stores.

WildStar was a fantasy/science fiction massively multiplayer online role-playing game that was developed by Carbine Studios, published by NCSOFT.

The game was released in on August 17, 2011. WildStar was held on the fictional planet called Nexus. The game had a mysterious and Mighty race known as the Eldan who disappeared, leaving behind a wealth of secrets for players to explore. The game recently closed down however Carbine Studios reopened the servers so that fans can enjoy the game for a additional 60 days. This gave the game an updated title of Wildstar 60 Days.

GAMECARD BY MAIL : You will receive your Gamecard code by email. To use it, you must login on your client account and enter the key code to add Wildstar 60 Days. Depending of the countries restrictions for certain games (usually Eu or Us version), please make you sure you are buying the gamecard for the correct country.
Standard Edition

Game is very bad optimized, if more precisely not optimized at all , so get ready for instability and bad FPS, even on top gaming hardware.

wildstar is good game …
i want play this the game …
and thanks .

as i saw the trailer,it’s awesome game and like always allkeyshop make a good discount for the price thank you

Nice Game,but it’s not really my type,thnx any way! 😀