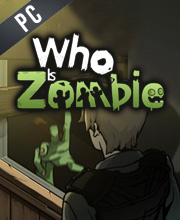 What is Who Is Zombie CD key?

It's a digital key that allows you to download Who Is Zombie directly to PC from the official Platforms.

How can I find the best prices for Who Is Zombie CD keys?

Allkeyshop.com compares the cheapest prices of Who Is Zombie on the digital downloads market to find the best sales and discount codes on trusted stores.

Who is Zombie? is a zombie apocalypse simulation and management game developed by CINDYZ STUDIO in it you must prevent zombies from getting into your shelter and infecting everyone, it is the year 2033 the year where the first-ever recorded zombie outbreak in human history occurred, the governments mass care shelters quickly reached full capacity, civilian centers also began to quickly fill up riots began happening on the streets as the people who are infected and not fight to get into one of these shelters. You are an Inspector sent by the government to one of these civilian shelters.

STEAM CD KEY : Use the Steam Key Code on Steam Platform to download and play Who Is Zombie. You must login to your Steam Account or create one for free. Download the (Steam Client HERE). Then once you login, click Add a Game (located in the bottom Left corner) -> Activate a Product on Steam. There type in your CD Key and the game will be activated and added to your Steam account game library.
Standard Edition
Compare Choose & Buy Download (689)