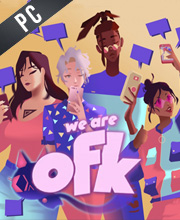 What is We Are OFK CD key?

It's a digital key that allows you to download We Are OFK directly to PC from the official Platforms.

How can I find the best prices for We Are OFK CD keys?

Allkeyshop.com compares the cheapest prices of We Are OFK on the digital downloads market to find the best sales and discount codes on trusted stores.

An interactive EP and musical genesis tale from the indie pop group OFK. about four buddies who live in Los Angeles and fantasize, date, and pay rent. A tale of the risks we take and the rewards that result from developing art.

We Are OFK is a phenomenal game that brings its characters to life in a way that few games have ever done so vividly. An emotional, grounded story with giddy highs and aching lows, Team OFK’s debut is an essential experience that deserves a captive audience.

We Are OFK is a musical narrative experience that perfectly justifies its genre-defying position; the music is hot, the cast are hotter, and not only will you care about them, you’ll care about hearing the next thing they do. It’s exceptional.

Zoom 1m 3m 1y All
Track product
EPIC GAMES KEY : Region Free / Worldwide. Requires Epic Games Launcher App in order to play the game. You need to create a free account here in order to download We Are OFK from Epic Plateform . Read the description on the store page about any language or country restrictions.
STEAM CD KEY : Use the Steam Key Code on Steam Platform to download and play We Are OFK. You must login to your Steam Account or create one for free. Download the (Steam Client HERE). Then once you login, click Add a Game (located in the bottom Left corner) -> Activate a Product on Steam. There type in your CD Key and the game will be activated and added to your Steam account game library.
Standard Edition
Compare Choose & Buy Download (803)