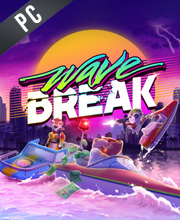 What is Wave Break CD key?

It's a digital key that allows you to download Wave Break directly to PC from the official Platforms.

How can I find the best prices for Wave Break CD keys?

Allkeyshop.com compares the cheapest prices of Wave Break on the digital downloads market to find the best sales and discount codes on trusted stores.

Wave Break is an arcade skate-boating game inspired by classics of the genre (Tony Hawk) but with an explosive 80’s crime-filled Miami Vice-themed world. Developed by Funktronic Labs you will be able to grind, grab, kickflip, or shoot your way through victory in the game’s various game modes from a single-player campaign to online multiplayer, where you can even play your own maps, you created.

The combination of guns and skateboarding amid the bright aesthetics makes for great fun. There’s a good reason why I can’t stop playing and trying to perfect each level. If you can’t beat the heat this Summer, then soak up the sun in Wave Break.

Zoom 1m 3m 1y All
Track product
STEAM CD KEY : Use the Steam Key Code on Steam Platform to download and play Wave Break. You must login to your Steam Account or create one for free. Download the (Steam Client HERE). Then once you login, click Add a Game (located in the bottom Left corner) -> Activate a Product on Steam. There type in your CD Key and the game will be activated and added to your Steam account game library.
Standard Edition
Compare Choose & Buy Download (803)