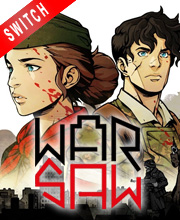 What is WARSAW Game Code?

It's a digital key that allows you to download WARSAW directly to Nintendo Switch directly from Nintendo eShop.

How can I find the best prices for WARSAW on Nintendo Switch ?

Allkeyshop.com compares the cheapest prices of WARSAW on the digital downloads market to find the best sales and discount codes on trusted stores.

Warsaw is a turn-based tactical role-playing game that was published by Gaming Company and developed by Pixelated Milk. The game is set in the World War II era and takes place in a war-torn city that is beautifully represented mesmerizing hand-painted graphics. As commander of a small militia, you must that employ and deploy your soldiers strategically; according to their strengths and unique skills. Ultimately, your goal is to forcefully reclaim a city that has been captured by lethal and oppressive enemy forces. The game can be acquired for the Nintendo Switch.

Be the first one to write a review about WARSAW !