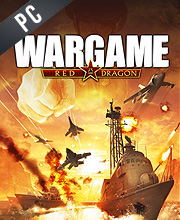 It's a digital key that allows you to download Wargame Red Dragon directly to PC from the official Platforms.

How can I find the best prices for Wargame Red Dragon CD keys?

Allkeyshop.com compares the cheapest prices of Wargame Red Dragon on the digital downloads market to find the best sales and discount codes on trusted stores.

Wargame Red Dragon is a real time strategy video game that is developed by Eugene Systems and published by Focus Home Interactive. It is the game that followed the Wargame: Airland Battle of 2013.

Tagged as “The new reference to RTS at its best!” This specific game from the Wargame series returns bigger, badder and bolder. It has a playable military resources that includes 17 nations and over 1450 units.

Amphibious and naval warfare has also been added to the mix. This is a large-scale conflict in which the Western forces will be fighting against the Communist bloc. At your command will be tanks, planes, helicopters, all new warships as well as amphibious units.

With the game’s extensive multiplayer mode, it can accommodate up to 20 players that can battle with each other all at once. Master the battlefields and take control of the seas. Be impressed with its realistically amazing graphics and very great attention to detail.

Keep your head straight and in the game as you battle with other players and secure enough command zones to overpower your other opponents. Sharpen your strategy skills and think of great tactics to get the upper hand in the game.

EPIC GAMES KEY : Region Free / Worldwide. Requires Epic Games Launcher App in order to play the game. You need to create a free account here in order to download Wargame Red Dragon from Epic Plateform . Read the description on the store page about any language or country restrictions.
EU STEAM CD KEY: Requires an EUROPEAN IP address or you must activate it with a VPN (Virtual Private Network) in order to play Wargame Red Dragon. Might have languages restrictions or language packs. Read the description on the store game page to know if the EU IP is only needed for activation or for playing also (maybe on EU Servers). Most of the stores offer you their help, or show you how to do this with a tutorial to follow.
EUROPEAN STEAM GIFT : It’s a steam gift for Europe which requires an European IP address to activate and to play Wargame Red Dragon on Steam. Read carefully the store description about region and language restrictions.
STEAM GIFT : A Steam gift is a one-time transfer you receive. You activate and install Wargame Red Dragon to play on Steam, it is a non-refundable game that stays in your Steam games collection. Please read the store description about any language or region restrictions.
STEAM CD KEY : Use the Steam Key Code on Steam Platform to download and play Wargame Red Dragon. You must login to your Steam Account or create one for free. Download the (Steam Client HERE). Then once you login, click Add a Game (located in the bottom Left corner) -> Activate a Product on Steam. There type in your CD Key and the game will be activated and added to your Steam account game library.
Bundle
Franchise Pack
Standard Edition