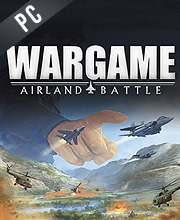 It's a digital key that allows you to download Wargame AirLand Battle directly to PC from the official Platforms.

How can I find the best prices for Wargame AirLand Battle CD keys?

Allkeyshop.com compares the cheapest prices of Wargame AirLand Battle on the digital downloads market to find the best sales and discount codes on trusted stores.

It is the sequel to Wargame European Escalation. The game is set in Scandinavia in the year 1985, several months after the tension between the NATO and the Warsaw Pact. An incident in the North Sea starts an all-out war and eventually sets the world on fire. Your role is to command the period’s military resources, taking control of not just tanks, but also planes.

Wargame Airland Battle lets you take command of more than 100 aircraft, ranging from fighters, bombers, and electronic warfare aircraft to name a few. Four new nations are also joining hands with the eight nations from Wargame European Escalation, giving you a total of over 800 vehicles and combat units to command.

The game’s solo mode offers a dynamic and vast campaign where every choice you make has an impact to events that will unfold in the game. You will get to choose your side from either NATO or the Warsaw Pact. Each of these two sides have their own different experience and objectives.

Playing with friends is also a must in Wargame Airland Battle as it also offers a Multiplayer Mode where up to 20 players can battle it out on games or tournaments online through EugenNet’s online services.

It’s time to put your tactical skills to great use. Grab this game now and choose which side you’re on.

EU STEAM CD KEY: Requires an EUROPEAN IP address or you must activate it with a VPN (Virtual Private Network) in order to play Wargame AirLand Battle. Might have languages restrictions or language packs. Read the description on the store game page to know if the EU IP is only needed for activation or for playing also (maybe on EU Servers). Most of the stores offer you their help, or show you how to do this with a tutorial to follow.
STEAM GIFT : A Steam gift is a one-time transfer you receive. You activate and install Wargame AirLand Battle to play on Steam, it is a non-refundable game that stays in your Steam games collection. Please read the store description about any language or region restrictions.
STEAM CD KEY : Use the Steam Key Code on Steam Platform to download and play Wargame AirLand Battle. You must login to your Steam Account or create one for free. Download the (Steam Client HERE). Then once you login, click Add a Game (located in the bottom Left corner) -> Activate a Product on Steam. There type in your CD Key and the game will be activated and added to your Steam account game library.
STEAM POLAND CD KEY : Steam Key from Poland to download and play Wargame AirLand Battle with English and Polish language only. Read the store description carefully about languages and restrictions.
Bundle
Franchise Pack
Franchise Pack
Standard Edition
Compare Choose & Buy Download (583)